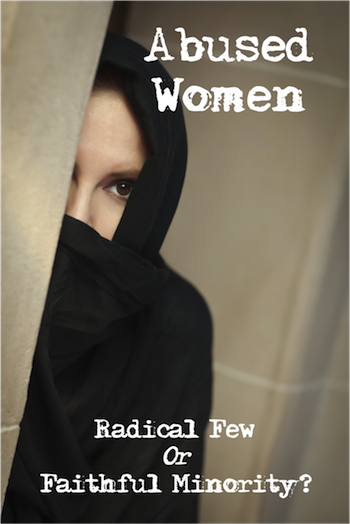 Below you will find an alarming passage from the Qur'an. Please read the passage and ask yourself what would happen if these values were to become dominant within our nation.

From this passage, I draw three very disturbing points about the Qur'an and abused women that should concern every American woman:

Just as the Qur'an has not lifted the Muslim world out of the sandbox rules of violence, neither has it lifted women out of the role of being objects for male possession.

Notice a few more disturbing quotes from the Qur'an.

"As for the righteous, they shall surely triumph. Theirs shall be gardens and vineyards, and high-bosomed maidens for companions: a truly overflowing cup."

"Therein are bashful virgins whom neither man nor jinnee will have touched before."

"In each there shall be virgins chaste and fair. Which of your Lord's blessings would you deny? Dark-eyed virgins, sheltered in their tents."

"They shall recline on couches ranged in rows. To dark-eyed houris We shall wed them."

Note: Webster defines an houris as "a beautiful nymph of the Muslim Paradise". Webster describes a nymph as being part of Greek and Roman mythology and defines them as "any of a group of minor nature goddesses living in rivers, trees, etc."

Pornography: Garbage in, Garbage out!

Some time ago, on one of our many trips, we passed a billboard directly across from a pornography store.  The message was clear and so very true. It simply pictured a set of handcuffs and these words, "Pornography: Garbage in, Garbage out!"

If Muslim men lay awake at night fantasizing about a multiplicity of "high-bosomed maidens" (Qur'an 78:31), "bashful virgins" (Qur'an 55:56) and "dark-eyed" mythological goddesses (Qur'an 52:20) with whom to cavort, how might they treat the less than perfect woman with whom they wake up? If paradise is filled with the carnal pleasures of sensuality, what keeps them from expecting the same here? Why would such carnal actions be holy in paradise, yet unholy here?

I believe the Qur'an's teachings on paradise may very well be one of its most disturbing elements. A playboy paradise only promotes a playboy lifestyle and can only lead to abused women.

Unlike Islam or the opposite extreme, American feminism, the Bible takes a balanced view of the sexes. Although Scripture plainly teaches that men and women are equal in value (Galatians 3:28), it also plainly teaches that they are different in function (I Timothy 5:8, Titus 2:4-5). When the equal value of men and women is honored and their unique functions are celebrated, the home is secure, marriages succeed and the children flourish.

Authority within the home stems not from men being "superior" or "because they spent their money on them" or from wives being "beat" into submission. (Qur'an 4:34) Authority within the home stems directly from the supreme love exemplified by Christ for His bride the Church. (Ephesians 5:22-33) Since Allah neither had a son nor wants one (Qur'an 10:68), he offers no Divine example for men to follow. The Qur'an leaves the door wide open for spousal abuse and cruel servitude of women.

The attraction of Heaven stems not from the anticipation of cavorting with "high bosomed maidens" or "bashful virgins" or "dark-eyed" mythological goddesses. (Qur'an 78:31, 55:56, 52:20) The attraction of Heaven stems from a desire to be with Christ. (Ephesians 5:22-33) The Qur'an not only leaves the door wide open for spousal abuse here, it also promotes a carnal skewing of the motives for going there.

Every Christian woman should celebrate the loving example Christ provided to guide their husbands into a proper relationship with them. They should also celebrate a biblical destiny that does not include becoming the play things of Heaven but rather becoming "joint heirs with Christ" and enjoying all the glories that await both men and women in that realm. (Romans 8:17, NIV)

This timely material is often presented as a series for revival meetings. Please use this form if your congregation would be interested in an Islam seminar.

Back to Top of "Abused Women"