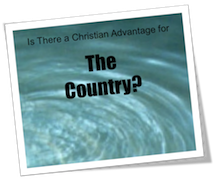 So what about the Christian advantage?  Is there one for the country in which we live?

Life is like dropping a pebble into a pool of water. At birth, all ripples are concentrated in the center. As a person matures, the rings of social interaction and influence circle outward. For the Christian advantage to be truly advantageous, every ring must be advanced by the values of the Christian life.

It is the purpose of this page to focus on one of the outer center rings. Is there a Christian advantage for the country?

Consider this sample answer to one of the questions addressed on this topic. 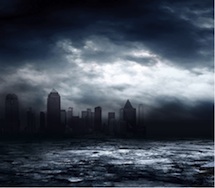 In Romans 1:18-32, we find the detailed description of a society that wandered away from God as well as the telltale signs of their departure.  Notice the unmistakable pattern and similarities between these people and the people of America today.

1.  Verses 18-25 record that they refused to acknowledge God in spite of the obvious design that can be “clearly seen” (vs 20) through His creation.  God, therefore, “gave them over in the sinful desires of their hearts” (vs 24), because they “worshipped and served created things rather than the Creator.” (vs 25)

AMERICAN PARALLEL - In the early 60’s, America refused to acknowledge God as Creator despite the “clearly seen” (vs 20) evidence of His design.  We then replaced the reading of the Bible in our schools with the study of evolution.  In so doing, we “worshipped and served created things rather than the Creator.” (vs 25)

2.  Verses 26-27 record that they engaged in “shameful lusts” and the women “exchanged natural relations for unnatural ones.  In the same way the men also abandoned natural relations with women and were inflamed with lust for one another.  Men committed indecent acts with other men, and received in themselves the due penalty for their perversion.”

AMERICAN PARALLEL- During the 60’s and 70’s, this country experienced a “sexual revolution” that rivals the perversion of Sodom and Gomorrah and the Dark Ages.  Premarital sex and fornication were rampant and homosexuals began “coming out of the closet” to publicly display their exchange of “natural relations for unnatural ones”. (vs 26)

3.  Verses 28-31 record that God “gave them over to a depraved mind”. (vs 28)  This depraved mind led them into “every kind of wickedness, evil, greed...envy, murder, strife, deceit and malice”. (vs 29)  They became “gossips, slanderers, God-haters, insolent, arrogant, and boastful” and they invented “ways of doing evil”, disobeyed their parents, and became “senseless, faithless, heartless, (and) ruthless”. (vs 29-31)  They were a society out of control.

AMERICAN PARALLEL - One need not look very far to see the sad parallel between these words and the American culture.  These descriptions could easily be mistaken for today’s headlines.  With regularity, we hear of “depraved” individuals entering public buildings and opening fire on innocent victims, or we see news footage of bones being removed from the back yard of a serial killer.  “Slander” has become a way of life for the publishers of “gossip” and “deceit”-filled tabloids.  “Greed” has a stranglehold on sports and everyday business dealings.  Entertainment producers spend their day trying to “invent (new) ways of doing evil” so they will have another shocking sequence with which to draw the public into their theaters.  “God-haters” are growing in number and heinous crimes committed by Satan’s minions are reported every day.  Yes, America is operating with a “depraved mind”! 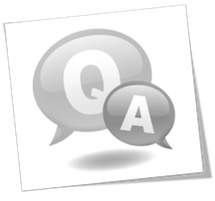 Has God removed His blessing from America? If He hasn’t, He is well on His way to doing so. How could He remain just and not punish us for committing the same sins as this ancient culture? America is ripe for judgment. The best way to prepare is by getting to know the Judge. Surrender to His authority. Live the Christian advantage.

Back to the top of "The Country"

If this article was helpful, then you may also be interested in the following topics regarding your country: