Can the Bible Be Trusted? Part 3 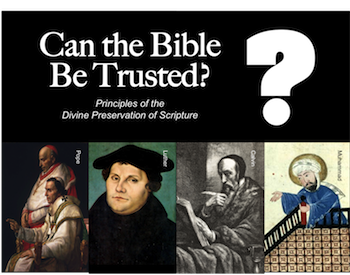 Remember, man cannot be trusted with the greatest message of all time. In order to be sure of God's message, always let the Bible interpret the Bible. Use it in your personal Bible study. Test every preacher, teacher, and church leader by it. Filter all doctrines through it. Let the Bible speak for itself!

Perhaps the most dramatic evidence that the Bible is trustworthy comes from the way its message has been protected by God throughout history. Notice just a few examples.

Because of the eternal, indestructible, ever harmonious nature of this book, the Bible has never lost its place on the bestselling list! In fact, there is no other book throughout all history that remotely compares with the popularity of the Bible. Parts of the Bible have been translated into more than 1300 languages. About 75 million Bibles are sold each year. Well over one billion copies of this book have been printed. There have been enough Bibles printed to make a solid ribbon of Bibles all the way around the world, not just once or twice, but three times.

God doesn't just promise and present His message in providential parallels, He takes an active role in protecting it. In order to be sure of God's message, always let the Bible interpret the Bible.

Prophecy is not just an evidence of God's power, it is also a preservative. By predicting events long before they become reality, God ensures that the message came from Him because only He has the power to bring about such fulfillment. The completion of prophetic predictions is nothing less than Divine evidence that His words are prompted and protected by Him.

Both Zechariah and Isaiah lived over 500 years before Christ was even born. They wrote the books which bear their names and are credited for recording numerous prophecies about the death of Jesus. The ancient book of Psalms, which is also rich in prophecies, can be dated even earlier than Isaiah and Zechariah. Even though these men lived so far apart in time and predicted events that would occur hundreds of years after their deaths, the harmony and accuracy of their prophecies is almost unbelievable. Notice just a few of these amazing prophecies.

Prophecy emphasizes the attention God has given to His message. If He took the time to connect all those prophetic dots back then, why would He not take the time to protect His message for us today?

Yes, you can trust Scripture and depend upon it to test all doctrines. God's prophetic preservative says so.

In order to be sure of God's message, always let the Bible interpret the Bible.

Missed the first two parts of this study? Go to:
Can the Bible Be Trusted? "Part 1"
"Part 2"

Back to Top of "Can the Bible Be Trusted? Part 3"