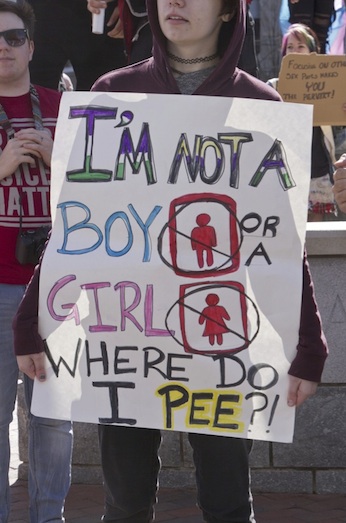 Reminder: The following material is not only politically incorrect, it also calls into question much of that which is conservatively sacred. Conclusion - we did this to ourselves and only by radical repentance and Divine discipline can we hope to survive.

In order to solve the cultural chaos that we have created, three questions must be addressed:

How did we get here?

Last time we identified the root of the problem by addressing the question, "How did we get here?"

In this post we will begin a journey through 5 practical steps that must be taken immediately if your family is to survive this cultural collapse.

What can we do?

During the summer of 2016, the United States Supreme Court gave legal legitimacy to homosexual marriage.

The following news story appeared less than two weeks after that tragic decision by the Supreme Court. Is anyone surprised?

"A Montana man said Wednesday that he was inspired by last week's U.S. Supreme Court decision legalizing gay marriage to apply for a marriage license so that he can legally wed his second wife." - Helena, Montana. (AP), Matt Volz, July 4, 2015, ksl.com

Q: After polygamy, what will follow? Will a push for the legalization of pedophilia be next? Can it really be said that love wins if one man has multiple wives or pedophiles are invited to come out of the closet and prey on the innocent? When man defies the Creator and arrogantly assumes that he is worthy to redefine love, this is the result. Lust becomes love. Divided commitment becomes love. Manipulation of the innocent in order to satisfy carnal cravings becomes love. In other words, just as homosexuals have redefined marriage, love is also undergoing a cultural redefinition.

What Can We Do?

If recent elections teach us anything, it should be this, political maneuvering will not save our country. America no longer has the necessary number of passionate Christians to dominate the political process. It is time for a new approach!

Better yet, it is time for an old approach! It is time to implement God’s ancient plan! Did you know that God’s most ancient directives concerning a functional society centered not on kings, presidents, or even the church, it centered on family? “God blessed them and said to them, ‘Be fruitful and increase in number; fill the earth...’” (Genesis 1:28) “...a man will leave his father and mother and be united to his wife, and they will become one flesh.” (Genesis 2:24)

When creation needed saving, God looked for a family - Noah and his family. (Genesis 6)

When His promise needed preserving, God looked for a family - Abraham and Sarah. (Genesis 12:1-3)

When His people needed motivating, God looked for a family - Joshua and his family. “But as for me and my household, we will serve the Lord.” (Joshua 24:15)

When His Son needed placing into this world, God looked for a family - Joseph and Mary. (Matthew 1:18-25)

When His future relationship with us needed explaining, God used the family - “And I heard a loud voice from the throne saying, ‘Now the dwelling of God is with men, and he will live with them. They will be his people, and God himself will be with them and be their God.’” (Revelation 21:3)

From the very beginning, God has always placed His favor upon righteous families. One may ask, “What can we do to survive this cultural chaos?” The answer is ancient and it is obvious - restore the righteousness of the family!

Unfortunately, a righteous generational momentum cannot be restored before the next election cycle. God’s ancient plan takes time and it requires meticulous devotion to detail. For solutions to come, God’s people must stop looking for the “quick fix” (politics). We must start investing in the “long haul” (family).

His generational approach will work! Will we?

Thanks to a government that has lost its way and has run aground on the shores of insane masochistic reasoning, the public school system is now a very dangerous place for your child both physically and especially spiritually. Protect your greatest investment. Shelter their young minds, bodies, and spirits.

When I first penned these words in 2014, the details of yet another horrible tragedy were playing out in news reports all across America. Another madman had shot himself and many others at a school in rural Connecticut. According to reports, the 20-year-old man first killed his mother then directed his violent madness toward an elementary school in Newtown, Connecticut. Of the 28 dead, 20 were children between the ages of 6 and 7. One child was shot 11 times.

The nation was in shock. All of us were asking, “What has happened to America?!”

Reports of horrific violence like that have not gone away. In fact, they seem to be coming with alarming regularity. Have we really become such a dysfunctional society that even our grade school children are at risk in their own classroom?

America has the best teachers in the world, but even they cannot protect our children from the poor parenting that other students are acting upon. New gun control laws will not keep our children safe. More metal detectors, locker searches and police officers in the hall will not solve this problem. To keep our children safe, we must bring them home. We must reintroduce a full-time domestic guardian (mom) who can train them within the security of our own safe house.

Ask yourself this question: What other tragic cultural indicators do I need to see before resolving that it is time to make some radical decisions on behalf of my family?

Next time we will look at more practical suggestions and urgent adjustments that we must take to endure this cultural collapse. Until then, pray for the coming of the Lord and keep your children close.

(The article above was taken from the book shown below.)

Back to Top of "Solving Cultural Chaos, Part 2a"