Why is Islam growing? 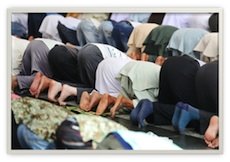 Islam is now one of the fastest growing religions in the world. In spite of the attack on September 11, 2001, and in spite of their global dominance of terroristic acts, the religion that embraces violence against “the infidels” and treats women like property, continues to grow in popularity. “Why?” you might ask. “Why does this movement continue to grow?”

Muslims multiply because they are passionate about what they believe. The Muslim passion runs so deep that Palestinian young people will stand in line to volunteer to strap explosives around their waist and blow themselves up in a crowded Jewish assembly. In America, many Christian churches cannot even get their young people to attend mid-week services, let alone die for the cause of Christ.

Imagine the cooperative passion it took, on September 11, 2001, to get 19 Muslim highjackers on 4 different airplanes to all commit suicide within hours of each other. Many Christian churches in America could not get 19 different men in a single air-conditioned office to agree on the church budget, let alone volunteer to die for the cause of Christ.

Muslims are multiplying because they are passionately committed to what they believe. Until Christianity equals that passion, we will continue to be threatened by Islamic fanatics.

Muslim parents take great pride in rearing children who are completely dedicated to the cause of Muhammad. Their hearts are especially full of pride when one of their own dies in the fight to bring Islam to the world. Shortly after a young suicide bomber killed himself and 21 Jewish teenagers at a disco in Tel Aviv, Time magazine carried the following quote from his proud Muslim father, “I am very happy and proud of what my son did and, frankly, I am a bit jealous. I wish I had done the bombing. My son has fulfilled the Prophet’s [Muhammad’s] wishes. He has become a hero! Tell me, what more could a father ask? My prayer is that Saeed’s brothers, friends and fellow Palestinians will sacrifice their lives too. There is no better way to show God you love him.”

There are fewer and fewer young men who are studying for the ministry because there are fewer and fewer Christian fathers who would be proud of a son who would choose such a sacrificial lifestyle. Too many Christian parents are more concerned with materialistic security than they are about spiritual wealth in heavenly places. We spend large amounts of money buying our children band uniforms and sports equipment, but would we spend an equal amount of money to send them on a mission trip to a third world country? We encourage them to make good grades and we celebrate when their name is placed on the honor roll, but do we encourage them to develop personal Bible study habits or throw a party when their name is written in the Lamb’s book of life?

Muslims are multiplying because Muslims are pilgrims. According to a report given in Lamb & Lion Ministries, only 7% of the people in England attend church today. In contrast, there are now more Muslims in England than there are Methodists and Baptists combined! In 1945, there was only one mosque in England. Today there are over one thousand. In France, Muslims are the nation’s second-largest religious group and have more followers than all Protestant denominations put together. Muslims aim to make France an Islamic Republic by the year 2015, and Britain by the year 2025. Their strategy is simple. They move in and patiently work toward domination of a country through conversions, immigration and high Muslim birth rates.

Today in America, there are approximately six million Muslims. Of the 1,100 mosques in America, 80% have been built within the last twenty years. Much of the money for these new mosques has been supplied by Islamic foreign embassies. Saudi Arabia alone has spent $87 billion since 1973 to spread Islam throughout the United States and the Western hemisphere. Other countries, including Iraq, Libya, Kuwait and Iran have poured millions of dollars into the West for the same purpose.

Muslims are multiplying because Muslims are pilgrims. They have a world view of evangelism and wherever they go they take their faith with them.

Christians must return to the days of “grass roots” evangelism. The church has for too long depended upon fancy programs and hired servants (preachers) to do the job that every Christian is assigned. I Peter 3:15 tells Christians, “Always be prepared to give an answer to everyone who asks you to give the reason for the hope that is in you.” The very best person to share the hope that you have found in Christ is not the preacher. It is you!  A personal, one-on-one discussion that witnesses to the ways that God has worked in your life is the very best way to draw others into a relationship with Jesus.  Fancy sermons and elaborate worship services are rarely enough by themselves to lead a person to Christ.  These simply capitalize on a foundation that was already laid by the example and witness of others.

As a pilgrim, we must also be willing to go wherever the lost may be found. In Luke  19:10, Jesus said that the reason He came into the world was “to seek and save that which was lost.”  Before ascending back into Heaven, He passed along the same assignment to His followers. (Matthew 28:19-20 ; Mark 16:15-16)

It is an awesome responsibility to learn that the world is eternally lost without knowing Christ and that we are the only ones capable of introducing Him to them.  It is estimated that every 21 seconds someone on our planet dies without knowing Jesus.  In some areas of the world, people recognize the brand name Coke but have never heard about the Christ. There is much work to be done and many friends to be made.

Until Christians begin taking personal responsibility for sharing their faith wherever they may go, we will continue to be threatened by Islamic fanatics.

Before concluding this list, we must point out that Muslims are not just multiplying because they are passionate, proud and pilgrims.  They are also multiplying because they are prisoners. The two most effective ways to influence people is through the gift of freedom or the threat of oppression. Muslims are prisoners of a harsh, hopeless religion that suppresses personal liberty, brutalizes women, and fosters terrorism all around the globe. Islam imprisons followers through oppressive legalism.

Unlike Christianity, Islam does not have the good news of freedom in Christ Jesus. Ours is the power of the resurrection. We must return to those roots! We must celebrate that which makes us different from all other world religions. Too many Christians serve God out of guilt, fear, and coersion rather than redemption, confidence, and love. Until Christianity throws off this horrible similartiy to Islam, we will continue to reap the negative effects of legalism.

Sources for this article:

Back to Top of "Why is Islam growing?"