The Evolution of Reformed Theology:
When Calvinism is Applied - Part 1 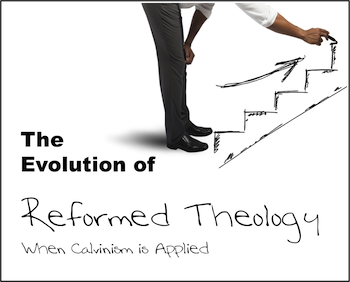 Some have asked, "Hey Brother Sonny, why all this obsession with Calvinism?" It is my prayer that this series of posts will answer that question.

I am convinced that, other than apathy, two of the greatest threats facing the church today are Islam from without (physical threat) and Calvinism from within (spiritual threat). While I have prayed that God would remove this assignment from me, my concern deepens every day. Like Jeremiah, I feel a burning in my bones to expose this false teaching and draw the church back to a unity based upon biblical harmony. Jeremiah 20:8-10 has truly become my counsel.

Some time ago, I received the following message from a young man drawn into Calvinism.

"My concern with your posts is the dissension it causes within the body."

While I would never create "dissension" just for dissension's sake, it is important to note that most of God's messengers were dismissed by false teachers who used this very same excuse.

Jeremiah exposed false teaching and dissension happened. "Then the officials said to the king, 'This man should be put to death. He is discouraging the soldiers who are left in this city, as well as all the people, by the things he is saying to them. This man is not seeking the good of these people but their ruin.'" (Jeremiah 38:4, NKJV)

Jesus exposed false teaching and dissension happened. “Do not think that I came to bring peace on earth. I did not come to bring peace but a sword. For I have come to ‘set a man against his father, a daughter against her mother, and a daughter-in-law against her mother-in-law’; and ‘a man’s enemies will be those of his own household.’... And he who does not take his cross and follow after Me is not worthy of Me. He who finds his life will lose it, and he who loses his life for My sake will find it." (Matthew 10:34-36, 38-39, NKJV)

Peter exposed false teaching and dissension happened. "But Peter and the other apostles answered and said: “We ought to obey God rather than men … When they heard this, they were furious and plotted to kill them." (Acts 5:29, 33, NKJV)

Paul exposed false teaching and dissension happened. "Some indeed preach Christ even from envy and strife, and some also from goodwill: The former preach Christ from selfish ambition, not sincerely, supposing to add affliction to my chains…" (Philippians 1:15-16, NKJV)

Peter's words ring loud and clear in the mind of every truth seeker, "We ought to obey God rather than men." Please don't ever fall into the trap of thinking that just because a man's word results in dissension it has to mean he intended for it to be that way. Don't dismiss a man's word simply because of the reaction it brings. Truth is often met with resistance.

Back to Top of "The Evolution of Reformed Theology: When Calvinism is Applied - Part 1"