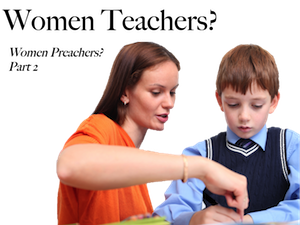 In the previous article entitled "Women Preachers?", we established the intent behind gender-specific roles within the church. In this article, I want to expose a truth that to some may seem contradictory, but in reality is the only consistent conclusion. Allow me to set it up with this observation.

Many Christians forbid women to preach, but then extend that limitation to teaching a Bible class of young boys who have been baptized. This is a position I believe we must rethink. It is a conclusion that is both illogical and damaging to the Divine illustration.

Being born into Christ does not make a boy a man, it makes him a baby in Christ.

Notice an intriguing excerpt from the childhood of Jesus. Consider the parallels and implications for today.

"And He (Jesus) said to them, 'Why did you seek Me? Did you not know that I must be about My Father's business?' But they did not understand the statement which He spoke to them. Then He went down with them and came to Nazareth, and was subject to them, but His mother kept all these things in her heart. And Jesus increased in wisdom and stature, and in favor with God and men."

Notice the parallel between the adolescent Christ and boys today who declare through baptism that they have accepted the assignment to be about their Father's business. Notice also the highlighted phrase and the importance of Jesus being subject to "them".

Q: Did the striking declaration of Jesus at the Temple rearrange the authority structure within Joseph's home? Did it render Mary unfit to be Jesus' teacher? Consider the context. Jesus (age 12) had just been found engaging in a post-graduate level discussion with the finest teachers of Judaism. Yet within 4 verses of this impressive exchange and His declaration of identity, it says that Jesus went home and was subject to them (Joseph and Mary). He "increased in wisdom and stature, and in favor with God and men." Clearly, Mary's womanhood did not disqualify her from teaching or even bringing the teenage Christ into subjection.

Mature Christian women should not only be permitted to teach these boys, the example of Christ's childhood promotes it!

In the first article, we concluded that when a woman submits to her husband she honors God by becoming a living illustration of Christ's position as head over the church (Ephesians 5:22-24) and by guarding God's image in the heavens (1 Corinthians 11:10). However, to be fair with the obvious intent behind these principles, the Divine logic must be followed to its equally obvious conclusion - the man's authority is based upon his relationship to his wife. A young boy, without a wife cannot have this authority. As such, a woman teacher should not be limited in her instruction of him based upon her gender. He is not a man or the ruler over a household. The living illustration of order within the church is not at risk. Mature Christian women should not only be permitted to teach these boys, the example of Christ's childhood promotes it!

I would like to suggest that the image of God could be at risk in another way. When mature Christian women are forbidden to teach boys (baptized or not), the message of God's order is disrupted. When Paul wrote, "For this reason the woman ought to have a symbol of authority on her head, because of the angels," (1 Corinthians 11:10, NKJV) I believe he was indicating a heavenly struggle much like the one described in Job 1. God's honor is under attack. Satan and his angels mock the created sphere and they magnify any flaw their demonic schemes can bring about. Just as Job glorified God through perseverance and submission to the Divine order, our submission to God's design is equally important. For the sake of order and the honor of God within the heavens, an unmarried boy must not be allowed to outrank a mature Christian woman.

If the intent of gender-specific roles is to illustrate Christ and the church, then placing an unmarried adolescent boy into the parallel position of Christ is illogical.

If the intent of gender-specific roles is to defend God's honor from demonic abuse, then placing an adolescent boy's authority ahead of a mature Christian woman only provides the demons with more ammunition to use against the image of God.

Should women be teachers? Absolutely! Their wisdom and nurturing should be applied in every area that promotes God's intent behind the man/woman relationship.

Back to Top of "Women Teachers?"