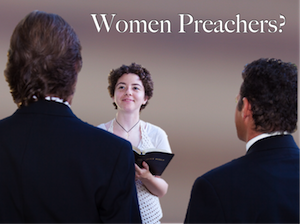 Unfortunately, the issue of women preachers is only a superficial symptom of a much deeper problem. To fully address the root cause of this controversy, please allow me a moment of introduction.

The satanic wolf has once again dawned the cloak of sheepskin and invaded the ranks of Christendom. In an effort to dilute the Creator's system, he has launched a campaign to demonize law. Sadly, he has convinced the masses that grace and law are enemies. His devilish approach involves three steps.

First, he targets those who have been bruised and battered by legalism. Their weariness and legitimate disdain for the self-righteous pursuits of modern-day Pharisees leaves them desperate for another approach. Instead of responding with balance, they often fall into the ditch on the opposite side of the road. Satan wins!

Second, he exploits the desperation which clouds their judgement. He convinces them that God's dismissal of the Old Testament Law is equivalent to God dismissing all other laws as well. Even the new law is dismissed as not really a law at all. (James 1:25, 2:12) In order to support their "grace will cover it" approach, they take many references to the Old Testament Law out of context. They build a law against law and, in the process, they become guilty of their own brand of legalism. Satan wins!

Thirdly, he entices them into defining grace as a gift that is so "free" it cannot even be accepted (a perverted view of predestination). Without free will, personal responsibility is also challenged. Compromise becomes tantalizing and the justification of casual obedience becomes the result. (Consider three examples listed below.) Satan wins!

...the foundational issue at play here really is not "Should women be preachers?" The real issue is the demonization of law.

…which brings us to the topic of this article.

The reason for the lengthy introduction is this, the foundational issue at play here really is not "Should women be preachers?" The real issue is the demonization of law. Throughout the ages, the Creator has been very careful to give consistent instruction on His design for man/woman relationships. Throughout time, cultural trends have challenged His design and history records that all of those cultures suffered chaos and eventual destruction because they demonized law.

Law is not the enemy! Even the Old Law was good for the purpose God gave it. To assume that grace precludes our responsibility to obey a law is to miss God's nature. God is love and when His nature becomes the law, love becomes the reason we submit. But please hear me! The law of love leads to far more than just obedience. The law of love leads Christians to submit to the Master in both action and in purpose.

Return to the examples above.

The law of love puts God's intentions above our own. It places His directives above our needs, even the need to understand why.

Should Women Be Preachers?

Should women be preachers? Maturity demands that we apply more than just simple obedience to a legal code. Mature Christians also seek God's intent behind the law.

Ever since Jesus gave the mission statement in Matthew 28:18-20, it has been the prime directive of the church to bring Good News clarity into a world of self-destructive chaos. I believe the feminist agenda infiltrating our ranks with a gender-neutral interpretation of Scripture is among the most damaging efforts Satan has at work today. It promotes confusion, not Good News clarity.  Gender-specific roles in the home, the church, and even the community are much more than just cultural trends. Truth is truth regardless of the time and the place in which it is being applied. (See "What Is Truth?") Applications may change, but the intent of the Divine instruction is eternal.

Allow me to give you two examples:

From the very beginning (Genesis 2:18), God intended for men and women to be complementary, not interchangeable. His interworking design was intended to illuminate our journey toward knowing Him. It was intended to be a living illustration of the relationship He desires to have with us. Submission to our role is essential to a relationship with Him.

Gender-specific roles illuminate the Gospel. They define the path toward knowing God. In our self-destructing culture of lawlessness, the demonization of law must be opposed. Obedience to the law of love must be promoted. Do more than obey. Submit to God's nature. Give Him the intent of His heart.

Back to Top of "Women Preachers?"