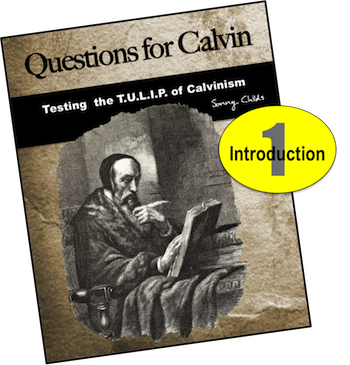 I firmly believe that Calvinism is one of the greatest challenges facing the church in these end times.

Perhaps the most alarming part is the number of unsuspecting followers who haven’t taken the time to research her core doctrines. They are so anxious to bask in grace that they neglect the foundation and build their house upon the sand. In a world so devoid of personal responsibility, Calvin's doctrine of grace without responsibility is truly alluring. Young people are rushing into fellowships that espouse these teachings of convenient conversion. They are deserting the truth and abandoning the church in alarming numbers.

Are we born with sin? Does predestination remove freewill? Are we once saved, always saved? Is baptism just an outward sign of an inward grace? These and many other questions will be addressed in this series.

Caution: The questions and answers found within this material are very sensitive. Had we raised these questions during the time of John Calvin's theocratic reign over Geneva, Switzerland, we could have faced exile or even execution for opposing his doctrine.

Who Was Calvin?
His Life:

John Calvin was born on July 10, 1509 in Noyon, Picardy, France. He was originally trained as a Humanist Lawyer. He attended the University of Paris, the University of Orleans, the University of Bourges, and is described as a theologian as well as an ecclesiastical statesman. He wrote commentaries on many books of the Bible, but his most notable work is entitled "Institutes of Christian Religion" published in 1536.

Later in life, he reigned, as both a religious and civil authority, over Geneva, Switzerland. He was cruel, dictatorial and torturous in his demand for doctrinal submission. He actively pursued the power of excommunication in order to punish those who disagreed with him. Within the first five years of his rule in Geneva, over 50 dissenters were executed and over 70 were exiled for their beliefs.

Calvin was a contemporary of Martin Luther, the "Father of the Reformation Movement." Although it seems Luther inspired Calvin's rebellion against the Catholic Church, the two men were fundamentally different in their theology. Luther began with a gracious God Who then went on to determine everything. Calvin started with a God Who determined everything then went on to limit His graciousness to only a few.

Calvin's view of predestination was especially troublesome for followers who longed to know that they were part of what Calvin considered to be the elect. Over time, he addressed this uncertainty by suggesting that works do not lead to salvation, but rather are evidences of one's salvation. The harder one works, the more prosperous he becomes. The more prosperous he becomes, the more assurance he can have of his own election. (Example: When asked how they know they have eternal life as taught in 1 John 5:13, a Calvinist will almost certainly point to the high standard of his own morality or that of his church. He is his own proof of his own election.) Though Calvin's view of predestination insists that God controls all, it also insists that man has the ability to prove his election by his own good works, a point that many would call a contradiction.

T.U.L.I.P. is an acronym often used to summarize the five core doctrines of Calvin, Total Depravity, Unconditional Election, Limited Atonement, Irresistible Grace, and Perseverance of the Saints. These five points were codified in the Canons of Dort by the Synod of Dort in 1618 and 1619 in order to address opposition raised by the Arminians of that day.

John Calvin was an unbalanced reactionary. Growing up under the heavy hand of Catholic legalism, he reacted by embracing the opposite extreme - man's total inability to choose God. His overreaction and out of balance response to legalism can easily be seen in his many quotes as well as the extreme qualifiers his followers used to describe points within the T.U.L.I.P. Notice these examples: According to Calvinism, man is not just depraved, he is "totally" depraved. Election is not accepted; it is "unconditional." Grace is not an invitation, it is "irresistible." Extreme qualifiers mark an extreme doctrine.

It is this tendency for unbalance that presents Calvinism's greatest flaw. By adopting his logic, a follower is forced to engage in selective obedience and ignore many of the Holy Spirit's words. Instead of seeking the harmony of Scripture, they lift one passage above another in order to substantiate Calvin's position. Instead of letting the Bible interpret itself, they let a man interpret the Bible for them. Instead of starting with the balance of God's Word, they start with the imbalance of Calvin.

It is the purpose of this series to lay Calvin's T.U.L.I.P. beside the Holy Word of God and test it for doctrinal compatibility. Will the extreme teachings of Calvin harmonize with the Holy Scriptures? Will the Bible validate his influence on the world or will the Lord of balance expose him as a reactionary and label him as a false teacher?
The evidence waits. Please join me next week for a discussion of the T in Calvin's T.U.L.I.P. - Total Depravity.

Want to continue this series? Go to:
Questions for Calvin: "T is for Total Depravity"
"U is for Unconditional Election"
"L is for Limited Atonement"
"I is for Irresistible Grace"
"P is for Perseverance of the Saints"
"Conclusion"

Back to Top of "Questions for Calvin"