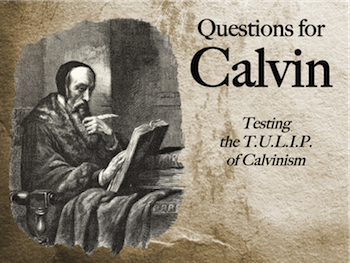 Testing the T.U.L.I.P. of Calvinism

In order to reasonably question the T.U.L.I.P. or any other part of Calvin's doctrine, Romans 9 must be addressed. It is a favorite "go to" passage for the Calvinists and, when all else fails, they are sure to default to it.

"It is not as though God's word had failed. For not all who are descended from Israel are Israel. Nor because they are his descendants are they all Abraham's children. On the contrary, 'It is through Isaac that your offspring will be reckoned.' In other words, it is not the children by physical descent who are God's children, but it is the children of the promise who are regarded as Abraham's offspring. For this was how the promise was stated: 'At the appointed time I will return, and Sarah will have a son.'

Not only that, but Rebekah's children were conceived at the same time by our father Isaac. Yet, before the twins were born or had done anything good or bad -in order that God's purpose in election might stand: not by works but by him who calls-she was told, 'The older will serve the younger.' Just as it is written: 'Jacob I loved, but Esau I hated.'

What then shall we say? Is God unjust? Not at all! For he says to Moses,

It does not, therefore, depend on human desire or effort, but on God's mercy. For Scripture says to Pharaoh: 'I raised you up for this very purpose, that I might display my power in you and that my name might be proclaimed in all the earth.' Therefore God has mercy on whom he wants to have mercy, and he hardens whom he wants to harden.

One of you will say to me: 'Then why does God still blame us? For who is able to resist his will?' But who are you, a human being, to talk back to God? 'Shall what is formed say to the one who formed it, "Why did you make me like this?"' Does not the potter have the right to make out of the same lump of clay some pottery for special purposes and some for common use?

What if God, although choosing to show his wrath and make his power known, bore with great patience the objects of his wrath-prepared for destruction? What if he did this to make the riches of his glory known to the objects of his mercy, whom he prepared in advance for glory - even us, whom he also called, not only from the Jews but also from the Gentiles?"

While this passage does present some controversial language, there are at least two very important facts that must be kept in mind before turning these words into a blanket validation of Calvin's doctrine of salvation.

Both election and salvation come totally as a result of God's grace. However, God's election and His salvation are not always given according to the same criteria.

In John 6:28-29, Jesus says that belief is a work, "Then they asked him, 'What must we do to do the works God requires?' Jesus answered, 'The work of God is this: to believe in the one he has sent.'" (NIV) According to the words of God's own Son, belief is a work. It is an exercise of freewill that places trust in God. But like baptism, repentance, and confession, belief is not intended to be a work of merit. It is not done to earn salvation, but rather to accept salvation.

Application: God elects like a potter who molds clay according to his will, but He saves like a father who witnesses belief in his children.

Consider this inspired description of God's predetermined election. Notice the difference between God's favor and His salvation.

"From one man he made all the nations, that they should inhabit the whole earth; and he marked out their appointed times in history and the boundaries of their lands. 27 God did this so that they would seek him and perhaps reach out for him and find him, though he is not far from any one of us."

In verse 26, God shows His favor or election to "all nations" by marking out "appointed times in history and the boundaries of their lands."

In verse 27, God shows the potential salvation that can result from His favor or election if we choose to "reach out for him and find him,..."

When Romans 9 is interpreted through the harmony of Scripture and the entirety of its context, the doctrine of unconditional election stands tall. It is undeniable, God favors who He wants to favor (Romans 9:18). But it must be understood that the doctrine found within this harmony of Scripture is not the same doctrine of "Unconditional Election" that is found within the teachings of Calvin. As we have seen, election and salvation are not necessarily the same thing. Only when election and salvation are viewed as complements rather than synonyms can the true harmony of Scripture be understood. Calvin would have us believe that, absent our freewill, God preordained a few for salvation and He preselected a majority for damnation. Furthermore, that flawed conclusion forced him to also assume that Jesus did not die for everyone but, rather, Christ limited His atonement for only a select few.

As I end this supplement, I wish to quote from one of the most well known verses in all the Bible. As I do, I plead with you to compare God's beautiful declaration of universal love with Calvin's disturbing view of God's limited grace. You decide which is true.

"For God so loved the world that He gave His only begotten Son, that whoever believes in Him should not perish but have everlasting life."

Back to Top of "Questions for Calvin"