The Greatest Threat to God's Favor 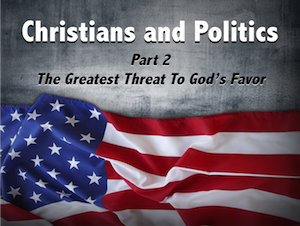 "Flee from sexual immorality. All other sins a person commits are outside the body, but whoever sins sexually, sins against their own body. Do you not know that your bodies are temples of the Holy Spirit, who is in you, whom you have received from God? You are not your own; you were bought at a price. Therefore honor God with your bodies."

I am convinced that the feminization of America has contributed directly to the rise of one of the most disdained sins in all the Bible, homosexuality. The intensity of God's distaste for this perversion reaches new levels largely because of the compound nature of the sin. Not only is homosexuality an abuse of the human body, it also defiles the very temple of the Holy Spirit. It insults God's design and lifts human passions above the authority of the Creator. When God’s natural design is denied, Satan’s unnatural perversions prevail. God confirmed this in Romans 1:26-27 when He said, “...even their women exchanged the natural use for what is against nature. Likewise also the men, leaving the natural use of the woman, burned in their lust for one another, men with men committing what is shameful, and receiving in themselves the penalty of their error which was due.”

When gender is considered insignificant, all other human standards are also at risk. In his book, Bringing Up Boys, Dr. Dobson explains that a young man’s need for his father is great, especially between the ages of 3 and 5 and at puberty. Should this male influence not be experienced at these critical points in life, the young man will be much more susceptible to homosexual tendencies.

As a result of our staggering divorce rate in America, more and more single moms are struggling to compensate and provide this male influence for their sons. Yet, even as mothers compensate by becoming more masculine, they harm their daughters by hampering her femininity. Is there any wonder why God placed such a high premium on marriage and designed it to be between a man and a woman?

In Romans 1:26-27 God clearly condemns homosexuality because it is unnatural.  Consider the following common sense conclusions about this perversion and its impact on America:

1.  Homosexuality is unnatural because, in order to experience intercourse, sexual partners must use body parts in ways they were simply not designed to be used.  In many cases their practices are not only unnatural but also unhealthy. Obviously this suggests that they are going against design.  One does not have to be an expert in anatomy to marvel at the way the male and female bodies were Divinely designed to match one another. Homosexuality is like forcing a puzzle piece into a wrong slot.  It was not designed to fit there and forcing it only creates more problems. The national impact of this unhealthy lifestyle is enormous.

2.  Perhaps the most compelling evidence to   suggest that this practice is unnatural is that homosexuality has no natural reproductive potential. One of the earliest commands given by God was to “be fruitful and to increase in number”. (Genesis 1:28) The homosexual relationship cannot in itself obey this command.  Homosexuality defeats God’s plan and stands His pattern for the family on its ear. God has, from the beginning of time, used the physical family to define the spiritual family. Homosexuality cripples that Divine illustration.

3.  Homosexuality is unnatural because it  is often the result of “extreme living”.  Many engage in this practice because they have experienced many other perversions and are looking for one more “living on the edge” experience.  Others have been submitted to extreme sexual abuse which created within them a sexual sickness much like an addiction.

We live in a world that is out of control.  Our society seems to be involved in a constant search of the ultimate thrill.  From bungee jumping to drug abuse, we continue to push the limits of moderation.  God says to be self-controlled (II Peter 1:6) and to be moderate in all that we do.  The world may call it “narrow-minded” or “outdated”, but God’s instructions have always been right in the past.  In spite of the world’s laughter, wisdom demands that we follow God’s command to avoid “extreme living”.

4.  Homosexuality is unnatural because it creates confusion for children who are brought into such settings.  If children from a single parent home have difficulty adjusting, how much more difficult must it be for children in a home with two mothers and no fathers or two fathers and no mothers?  God designed the home to contain one mother and one father because each of the sexes has unique qualities to offer in a child’s development.  Despite what the militant feminist movement might say, men and women are still uniquely different and children still require the influence of both genders to develop properly. Because homosexuals are now coming “out of the closet” in record numbers, the future will undoubtedly present an entire new field of psychological problems that must be treated.

5.  Homosexuality is unnatural because it is often accompanied by guilt.  The world will argue that these feelings come from the conservative standards of society and to some extent they are correct.  But these feelings also come from an inborn set of standards which help us determine what is natural.  When we violate these standards, our conscience hurts.  This sends a danger signal to our logic that something is wrong and a change is then expected.  When change does not come and repeated violations of the conscience occurs, callousness results and the person loses moral feeling in that area.  When this happens, the act seems natural to the calloused heart, even though in reality it is still an unnatural one. Although the moral wrongfulness has not changed, the person has simply lost their ability to feel that it is wrong.

Many fear the consequences of legalizing gay marriage, not just because of its own perversion but also because of the other chaotic perversions to which it could lead. If two men can marry, why not three? Could a father marry his son or a mother marry her grandchild? If gender is unimportant, does species really matter? Could a woman marry her cat or a man marry his dog? The perverse possibilities are endless when God’s plan for the sexes is discarded.

In Romans 1:32, God's concluding statement should cause all Christians to stop and think - to radically change the way we vote.

In Romans 1:32, God concludes His discussion of unnatural vices by making a list of the chaotic results that such a lifestyle brings. As you read through this list, it is not hard to see a vivid description of America’s culture today. However, it is God’s concluding statement that should cause all Christian voters to stop and think. In verse 32 He says, “...who, knowing the righteous judgment of God, that those who practice such things are deserving of death, not only do the same but also approve of those who practice them.”  In this small verse, God unveils a judgment that should radically change the way we cast our every vote. For far too long, Christians have concluded that it was enough to simply not be involved in acts of perversion. However, God goes one step further. To avoid God’s condemnation, Christians must not only be uninvolved, they must also be unapproving.

In Genesis 19, God rained down fire on Sodom and Gomorrah. In Romans 1:32, He says that we must not in any way approve of the lifestyles of perversion. Like the killing of the unborn, a candidate’s position on this vital issue should carry great weight in determining how Christians will vote. May we never be guilty of Romans 1:32, "Although they know God’s righteous decree that those who do such things deserve death, they not only continue to do these very things but also approve of those who practice them." (NIV)

Economic recovery means nothing if God’s blessing is lost. Education reforms mean nothing if God’s laws are not taught. Party loyalty means nothing if fire falls from the sky. Our nation stands on the brink of social destruction. Christians must not encourage her fall. We must work together to expose the greatest threat to God's favor, the defiling of His holy temple.

Back to Top of "Christians and Politics: The Greatest Threat to God's Favor"