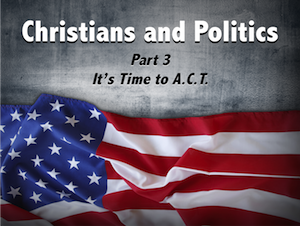 As expected, not everyone agreed with my previous post. I especially found this line to be intriguing, "I've read about people who don't vote because they truly believe the kingdom they belong to is not of this world. They wouldn't go to a foreign country and vote there and they look at this the same way."

The reason I find this line of reasoning to be so disturbing is that I spent an abundance of time addressing that very issue in the article. Of course, we are pilgrims in this land and, of course, as citizens of Heaven we do not have the same priorities as those whose only hope is anchored in the physical realm. But that doesn't change the fact that, for now, we are still in this realm and, maybe even more importantly, we have been invited, yes INVITED to inject our Christian values into the governing system of this "foreign country". How could any sincere, Christ-loving pilgrim pass up such a ready-made opportunity to influence a nation for Christ?!

I am fully convinced the reason America is on the verge of total moral anarchy is that those who are called to be the standard of morality (Christians) have reasoned our way into political impotence. We have convinced ourselves that, since this world is not our home, we have little responsibility to it as we journey through this foreign land.

Philippians 2:15-16 (NIV)
"… become blameless and pure, 'children of God without fault in a warped and crooked generation.' Then you will shine among them like stars in the sky as you hold firmly to the word of life."

While we are here, it is our prime directive to get involved, have an impact, leave a mark, make a difference for Christ.

It would not be appropriate for this important study to end without focusing on the good news that there is something you and I can do to help wake up this sleeping giant. America does not have to end in destruction But, we must be willing to A.C.T.!

To help you remember this vitally important conclusion, I have formed an acrostic that spells the word A.C.T.

"A" stands for ask. There is nothing you can do that will be more effective than to ask God to return His blessing to America.

"C" stands for contact. After praying for God's blessing, stand up and be counted for values held by our founding fathers and mothers. Contact your lawmakers, political representatives and standard setters. Make sure they know your deep conviction to put God's will at the top of every priority list.

One of the greatest favors you can do for America is to vote for those who will vote for God. God never commanded Christians to be politically passive. Stand up for God. Contact your representatives. Let them know your convictions.

"T" stands for teach. If America is to survive, parents must begin today to teach their children God's plan for the family and His eternal standard that never goes out of date. School homework cannot compare to the importance of Sunday school assignments. We, as parents, must readjust our priority list. Secular education is very important, but if our children gain the whole world yet lose their soul, what has it profited them? (Matthew 16:26) Teach your children to seek God first. (Matthew 6:33)

A wise man once said, "Stand for something or you will fall for anything." And so goes the future of America. If we as individual Christians will take it upon ourselves to stand up and demand a return to the values held by our founding fathers and mothers, America can be healed and prosperity will be the result. If, instead, we continue to remain seated, our children's future will be very bleak.

Once there was a little girl whose parents took her to hear a famous atheist speak on the theory of evolution. As he began his rampage against faith in God, she was quickly captivated by his speaking ability. He pounded on the podium and made his points hard and clear. Once, towards the beginning of the speech, he came to a rousing climax and said, "Is there anyone in this auditorium who believes there is a God?" No one responded because the great speaker was so intimidating. As the young girl peeked around her, she became very discouraged when she saw that her parents, Sunday school teacher, and even her preacher did not raise their hands.

Determined to make her own stand for God, she decided that if the atheist gave her another opportunity, she was going to raise her hand high. It was not long before the man came to another rousing climax in his speech and the atheist asked, "Is there anyone in this auditorium who believes that there is a God?" The little girl immediately slipped off her seat and raised her hand as high as she could. She was so short that the other chairs hid her from his view. No one saw her stand up for Jesus. Discouraged, she returned to her seat. Deep down in her heart she knew that somehow she had to capture this man's attention.

Towards the end of the talk, the atheist came to a rousing conclusion and for the third time he asked, "Is there anyone in this room who believes that there is a God?" The little girl, with determination burning in her eyes, jumped on top of her chair, raised her hand high into the air and began singing at the top of her lungs, "Stand Up, Stand Up For Jesus." Everyone was shocked. People strained their necks to see who could be so bold. But, as the little girl continued to sing, it was not long until her father and mother stood up beside her. Then, on the other side of the auditorium, a humbled Sunday school teacher stood and began singing as well. Yes, even the preacher rose from his seat that day and soon the entire audience was on their feet singing "Stand up, stand up for Jesus, ye soldiers of the cross, lift high his royal banner it must not suffer loss." The atheist, realizing he had lost control, slipped out a side entrance never to be seen again in that community. All this because one little girl had the courage to make a stand for God.

Wake up, America! Stand for God or we will fall for Satan. Let us all join hands and hearts to reclaim this great nation that God has built.

Missed Parts 1 and 2 of the "Christians and Politics" series?
Part 1 - "Condemned or Commanded?"
Part 2 - "The Greatest Threat to God's Favor"

Back to Top of "Christians and Politics: It's Time to A.C.T.!"