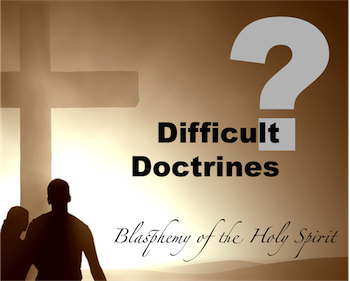 Q: What is blasphemy of the Holy Spirit?

Then Jesus entered a house, and again a crowd gathered, so that he and his disciples were not even able to eat. 21 When his family heard about this, they went to take charge of him, for they said, “He is out of his mind.”

22 And the teachers of the law who came down from Jerusalem said, “He is possessed by Beelzebul! By the prince of demons he is driving out demons.”

23 So Jesus called them over to him and began to speak to them in parables: “How can Satan drive out Satan? 24 If a kingdom is divided against itself, that kingdom cannot stand. 25 If a house is divided against itself, that house cannot stand. 26 And if Satan opposes himself and is divided, he cannot stand; his end has come. 27 In fact, no one can enter a strong man’s house without first tying him up. Then he can plunder the strong man’s house. 28 Truly I tell you, people can be forgiven all their sins and every slander they utter, 29 but whoever blasphemes against the Holy Spirit will never be forgiven; they are guilty of an eternal sin.”

30 He said this because they were saying, “He has an impure spirit.”

A: The context of Mark 3:22-29 leads us directly into the Spirit's own explanation of why Jesus made this extreme condemnation. "He said this because they were saying, 'He has an impure spirit.'" (Mark 3:30, NIV)

This verse indicates that the sin being addressed had to do with one of three things, possibly all of them:

1. Slandering the Holy Spirit by crediting His work as an act of Satan.  See Mark 3:22. "And the teachers of the law who came down from Jerusalem said, 'He is possessed by Beelzebul! By the prince of demons he is driving out demons.'" (NIV)

Application: James, the brother of Jesus, tells us that all good things come from God (James 1:17). Paul warns us not to "quench the Spirit" (1 Thessalonians 5:19, NIV). We must be very careful not to limit the Holy Spirit with man-made doctrines that assign His work to coincidence or even human effort. Examples: Luck, "Mother Nature" or even the conclusion that miracles have ceased.

2. Someone in the audience had actually spoken a slanderous statement against the Holy Spirit and Jesus was condemning those words.

I believe that blasphemous statement is actually recorded in verse 22, “He is possessed by Beelzebul! By the prince of demons he is driving out demons.”

It is interesting to note that Jesus' family said something similar in verse 21, “He is out of his mind", yet there is no indication that Mary or Jesus' siblings were eternally condemned.

Application: Blasphemy of the Holy Spirit is more than just concluding or even stating that a person is acting crazy. While it is nothing less than stupidity that causes a person to rob God of His glory, blasphemy intentionally goes one step beyond that. Blasphemy of the Holy Spirit robs God then openly assigns credit for His work to an evil entity.

3. In 1 Timothy 4:2, Paul speaks of a condition that is so evil it causes people to act as if their "consciences have been seared as with a hot iron." (NIV) When you read the surrounding context of 1 Timothy 4:1-5, it sounds a lot like the Jewish leaders who had made the blasphemous statement in Mark 3:22.

Years ago, I had a preacher friend who committed suicide. He believed that during the rebellious years of his youthful life he had blasphemed the Holy Spirit. Because of the mistake he assumed he had made, my friend concluded there was no hope of his redemption. Please understand, this teaching is a very difficult doctrine of the Lord and I would caution you not to draw extreme conclusions like my friend.

Back to Top of "Difficult Doctrines: Blasphemy of the Holy Spirit, Mark 3:20-30"