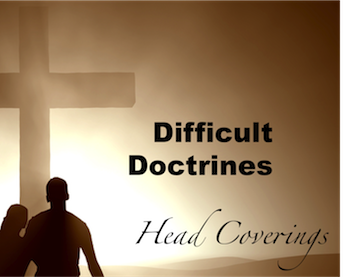 As gender significance comes under attack from some of the most powerful voices within our culture, it is vitally important that Christians ignore the carnal clamor and focus on the voice of God! This subject will be blatantly obvious in its political incorrectness. However, it will be equally obvious in its reliance upon the uncompromised Word of God.

One Presidential candidate has boldly proclaimed that, if she is elected, Christians will need to adjust their values. Perhaps it is time for Christians to re-examine our commitment to those ancient values.

The fundamental values expressed within this article are essential to our survival. The hand that rocks the cradle rules the world. But who rules the hand?

Q: Are Christian women commanded to have head coverings today?

A: Yes. However, the application of this answer is a little more complex than a one-word response.

For many, the question of head coverings is dismissed outright as an ancient cultural tradition that no longer has application. This is a great mistake. When a principle is rooted in the creation story, its authority often supersedes all cultural norms and is intended for the entire human timeline. (Example: Marriage between a man and a woman)

Notice the primary text around which the head covering debate often centers.

To address the modern-day application of this passage, we will progress through three areas of clarification.

The Principle of Authority

As we work through the inspired instructions of 1 Corinthians 11, it is important that we first take note of the root from which the head covering principle originates its authority. Consider three phrases that directly connect this principle to the creation story.

Now notice the phrase that immediately follows this list of creation principles, "It is for this reason that a woman ought to have authority over her own head..." (NIV, Underlining emphasis mine)

Application: Whatever we conclude about head coverings, one thing is contextually obvious, head coverings are rooted in creation, not culture.

Q: Why should a woman "have authority over her own head, because of the angels"? What does that mean?

Let's allow the context to answer. We have already established that the theme of this section is authority rooted in the creation story. Authority and order go hand in hand. Notice how Paul opens the chapter. He points to the authority of Christ, then he admonishes his readers to follow his example because his authority is rooted in the authority of Christ, which gives us order (Jesus, Paul, the reader). Just one verse later, he further illustrates the importance of order by citing God's authority chart, "the head of every man is Christ, and the head of the woman is man, and the head of Christ is God." (1 Corinthians 11:3, NIV) Perhaps the reason angels are mentioned here is that, when order prevails among God's created beings, God receives honor. When disorder prevails among us, angels are tempted with dishonor.

God's honor, and perhaps even the submission He receives from angels, is impacted by our submission to His order of authority.

Conclusion 1: Head coverings are rooted in creation, not culture. Our submission to the principle of authority even impacts the heavenly realm.

The Principle of Authority Applied

Given the unholy trend of blurring the lines between genders, the application of obvious authority markers takes on an even greater importance for the Christians of today.

As Paul concludes this section, he points to one example of head coverings that is timeless and also rooted in the creation story.

I believe it is those last few words which may provide the additional specifics for which we are looking, "...if a woman has long hair, it is her glory? For long hair is given to her as a covering." (1 Corinthians 11:15, NIV) 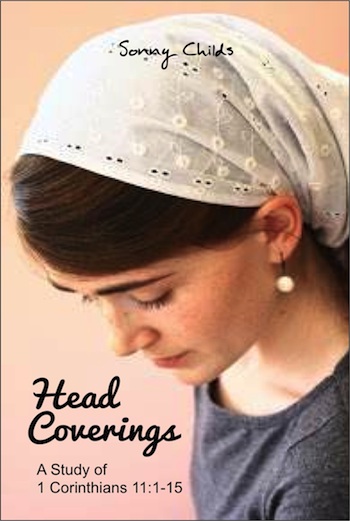 "Head Coverings" is available to you as a PDF (printable email). Please see the "Books by Sonny" page.

Q: If long hair is "given to her," who is the one that gives the long hair? Some might say it is the husband. But if we remain true to the contextual indicators of the creation story (vs7,8,9), it seems that God is the more likely answer. God, the Creator, gave woman long hair for a covering. It was by His assignment, not culture, that she should have long hair. It was by His intent that long hair should be her head covering.

If that is true, long hair takes on a much deeper significance and gives an even greater meaning to the phrase, "it is her glory." (1 Corinthians 11:15, NIV) If God is the giver, then her glory (long hair) is both a gift from God and a Divinely sanctioned head covering.

Conclusion 2: A woman's long hair reflects the glory she has been "given" by God and indicates to everyone, including angels, that she has chosen to live within the Divine order by submitting to her husband.

Personal Note: While many will want to challenge this conclusion, and certainly that is appropriate, it is important that everyone asks one very important question, "Why am I unwilling to accept this conclusion?" If I truly believe that the Scripture teaches something else, that is one thing. If, on the other hand, I simply do not like the implications of this conclusion and am unwilling to make the changes it might bring to my life, that is quite another.

Someone might ask, "But how long is long?" My response: It depends upon how obvious a woman wants to be with the "glory" that was "given to her" by God. No doubt, the principles of Romans 14 must also be applied here.

The Principle of Authority Applied Within the Collective Worship Service

As we examine Paul's applications of head coverings, two contextual parameters must be acknowledged.

Conclusion 3: In the context of 1 Corinthians 11:4-5, I believe Paul is addressing inspired women who speak on behalf of God. In that setting, an additional head covering other than long hair is necessary. Paul says a woman's long hair, which is her glory and the obvious acknowledgement of her husband's authority, should also be covered with an additional covering in order to show her obvious acknowledgement of God's glory and His authority over both.

We live in a "progressive" culture, one that often dismisses the ancient paths as outdated principles.

On the other hand, we also live in a "suppressive" culture, one that fights against the order and freedom established by the ancient paths.

Head coverings are just one example of the way human culture continuously challenges the Divine order and opens the door for even greater offenses. While the discussion of veils and hair length is likely to go on until the Lord's return, one thing is abundantly clear, the overall reason that this and all other passages were written was to inspire order stemming from God's ultimate authority. To be right with God, women should go out of their way to communicate to the world their obvious respect and honor for their head. In so doing, she will not only disarm those who malign God's Word (Titus 2:4-5), but she will also communicate to the angels, "God's way works!"

Back to Top of "Difficult Doctrines: Head Coverings, 1 Corinthians 11:1-15"