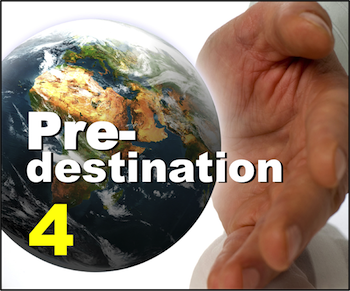 Because of the complex nature of predestination and the need to see the harmony of the whole counsel of God, this topic is addressed in four parts:

1. What is the biblical definition of predestination?

2. Can we impact our own predestination?

3. How does predestination impact evangelism?

Romans 9 is the "bread and butter" text of Reformed Theology (Calvinism repackaged). When all else fails, they are sure to default to this passage.

While this chapter does present some controversial language, there are at least two very important facts that must be kept in mind before turning these words into a blanket validation of Calvin's doctrine.

1. Romans 9 is only one very small part of a much greater context. Until it is discovered how this chapter harmonizes with the rest of Romans and all other scriptural authority, a proper conclusion cannot be drawn.

2. In order to draw that proper conclusion, Romans 9 must be interpreted through its specific context.

The specific theme of chapter 9 is best seen in verse 6, "But it is not as though the word of God has failed. For not all who are descended from Israel belong to Israel." (NIV) In other words, God's will is not thwarted just because some of the elect have rejected their election.

Paul uses three examples to illustrate this election. First, there is Jacob and Esau, the privileged grandsons of Abraham. Second, there is Pharaoh, a man who was so advantaged that he was able to rule the world. Lastly, there is the potter who awards and withholds favor, according to his will.

Isaiah 45:3-4 (NKJV) "That you may know that I, the Lord, Who call you by your name, Am the God of Israel. For Jacob My servant's sake, And Israel My elect, I have even called you by your name."

Romans 11:7 (NIV) "What then? What the people of Israel sought so earnestly they did not obtain. The elect among them did, but the others were hardened...."

Summary: Some of the elect were hardened because they chose to seek the blessing through merit. As a result, God rejected part of the elect (lost their salvation) and selected the remaining faithful to become His elect (favored).

While some falsely teach that the elect receive an "irresistible" calling from God, 2 Peter 1:10 plainly tells us that WE are responsible for making every effort to complete our calling by confirming it (NIV) or making it sure (NKJV).

Conclusion: Election and salvation are complements, but not necessarily synonyms. Election (favor) is given to help prompt response to the offer of salvation. Salvation is offered as a free will choice, not a pre-assigned condition.

Just a few verses prior to the three illustrations given in Romans 9, this very important definition of predestination is provided. 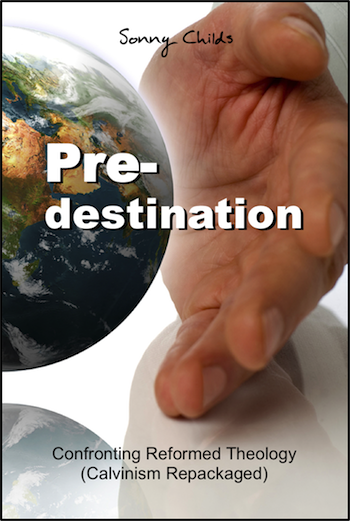 The book, "Predestination, Confronting Reformed Theology" is available to you as a PDF (printable email). Please visit the "Books by Sonny" page. Cost: Donation of any size.

In other words, the all-powerful Creator, the One called "I Am" because He is always in the present tense, predestines according to what He foreknows. Time has no power over Him. However, being an all-powerful God, He also has the power to allow free will within the realm of foreknowledge. Does God do this by limiting His own foreknowledge? (Example: Mark 13:32, "But about that day or hour no one knows, not even the angels in heaven, nor the Son, but only the Father.") Who knows? Explaining how this is done might very well be beyond human reasoning. However, through faith and the harmony of the whole counsel of God, we can accept that this well documented principle is essential to the responsibilities we have as beings created in His image.

Consider the following inspired description of the Divine process called predestination. Notice the difference between God's favor (election) and God's deliverance (salvation). Notice also the free will choices and responsibilities God ordains in spite of His foreknowledge.

Acts 17:26-27 (NIV) "From one man he made all the nations, that they should inhabit the whole earth; and he marked out their appointed times in history and the boundaries of their lands. 27 God did this so that they would seek him and perhaps reach out for him and find him, though he is not far from any one of us."

In verse 26, God shows His favor (election) to "all nations" by marking out "appointed times in history and the boundaries of their lands."

In verse 27, God shows the potential of His deliverance (salvation) that can result from favor (election), if we choose to "reach out for him and find him...."

Election and salvation are complements, but not necessarily synonyms. Election (favor) is given to help prompt response to the offer of salvation. Salvation is offered as a free will choice, not a pre-assigned condition.

Want to continue the study on predestination? Go to:
Part 5: "Conclusion"

Back to Top of "What about Romans 9?"