"ISIS beheads American journalist, threatens to do the same to another" - FoxNews.com, August 20, 2014 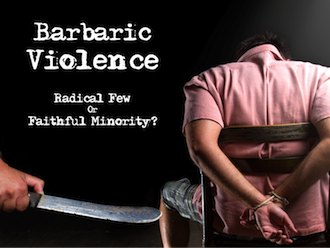 Below you will find several alarming passages from the Qur'an. We will let their holy book speak for itself. Please take time to read each passage and ask yourself what would happen if these values were to become dominant within our nation.

Qur'an 9:5 "When the sacred months are over slay the idolaters, wherever you find them. Arrest them, besiege them, and lie in ambush everywhere for them."

Qur'an 9:73 "Prophet, make war on the unbelievers and the hypocrites and deal rigorously with them."

Qur'an 9:121 "Believers, make war on the infidels who dwell around you. Deal firmly with them. Know that God is with the righteous."

Qur'an 5:33 "Those that make war against God and His apostle and spread disorder in the land shall be slain or crucified or have their hands and feet cut off on alternate sides, or be banished from the land."

Would you say it is fair to assume that a good Muslim obeys the Qur'an? If that is a reasonable assumption, then it is also reasonable to conclude that the politically correct propaganda about them is unreasonable. Islam is not a peace-loving world religion that has been hijacked by a few radicals. Islam is a violent world religion that has not yet brought all of its followers into full submission to the violent teachings of the Qur'an. Islam is a time bomb waiting to explode in our face and America seems not to have enough common sense to walk away from it.

Christians look beyond this realm and are commanded to live civil lives as pilgrims who do not belong here. (I Thessalonians 4:11, NIV)

When passages such as the ones above are brought to light, Muslims are quick to point out that God's people under the Old Testament acted very similarly. Even though their statement may be true, their defense has two very significant problems:

1. During the Old Testament period of history, God was preserving a remnant of humanity in order to bring His Son into the world. To do this, He worked within the violent infantile sandbox rules of that time.

2. Christians are "now" (Acts 17:30, NIV) called to live above the cruel "survival of the fittest" standards of this human realm. The arrival of the God/man Jesus changed the rules on the playing field dramatically. No longer do God's people bow to the violent bully standards of the world, we look beyond this realm and are commanded to live civil lives as pilgrims who do not belong here. (I Thessalonians 4:11, NIV)

"We have not received the spirit of the world but the Spirit who is from God, that we may understand what God has freely given us. This is what we speak, not in words taught us by human wisdom but in words taught by the Spirit, expressing spiritual truths in spiritual words. The man without the Spirit does not accept the things that come from the Spirit of God, for they are foolishness to him, and he cannot understand them, because they are spiritually discerned." (I Corinthians 2:12-14, NIV)

Islam is still living in the sandbox. Unlike those who have grown beyond the use of violence to solve their problems, the Muslim holy book has never lifted its people above the bully rules of cruel coercion. Because a good Muslim refuses to accept Jesus as God's Son, he cannot appreciate the standards of life on a spiritual plane, "they are foolishness to him, and he cannot understand them, because they are spiritually discerned." (I Corinthians 2:12-14, NIV)

May every Christian everywhere see it as his personal responsibility to draw others out of the sandbox of human immaturity through the acknowledgment of God's only begotten Son.

As this politically incorrect article goes to post, I find it interesting that the following lead story is posted on FoxNews.com. Is it irony or is this a sobering warning about the reality of the real-time challenges facing Christians today?

"The federal government is spending nearly $1 million to create an online database that will track 'misinformation' and hate speech on Twitter.

The National Science Foundation is financing the creation of a web service that will monitor 'suspicious memes' and what it considers 'false and misleading ideas,' with a major focus on political activity online.

The 'Truthy' database, created by researchers at Indiana University, is designed to 'detect political smears, astroturfing, misinformation, and other social pollution.'"

I guess it's that last phrase that troubles me most, "and other social pollution." How long will it be until Christianity is considered a "social pollution"? How long until articles like this and other expressions of opposition to Islamic barbarism are found to be hate crimes? How long until the presentation of truth about Islam's holy book is no longer protected by free speech?

The "Make It Real!" Ministry needs your support. As we wrote several weeks ago, this ministry is determined to post the truth in love in spite of recent persecution. Please stand with us. Your prayers and financial support not only encourage us but literally keep us going.

Search This Site by Typing in a Keyword: