Thief on the Cross - Excuses 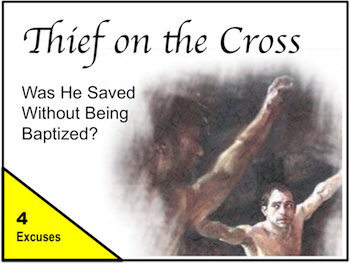 Thus far, we have noticed the overwhelming number of biblical examples that support the essential nature of baptism and looked at the possibility of exceptions. Now we must turn our attention to the most dangerous part of this entire discussion - "But what about…?"

Matthew 22:11-14 (NKJV) “But when the king came in to see the guests, he saw a man there who did not have on a wedding garment. 12 So he said to him, ‘Friend, how did you come in here without a wedding garment?’ And he was speechless. 13 Then the king said to the servants, ‘Bind him hand and foot, take him away, and cast him into outer darkness; there will be weeping and gnashing of teeth.’ 14 For many are called, but few are chosen.”

As a young man, I struggled with this story. If the king represents God, and if God throws people out just because they don't have the right clothes, I feared that my filthy rags would be so unworthy He would surely condemn me to a place of "weeping and gnashing of teeth." After all, didn’t the king invite the common folks off the street: folks who couldn’t afford fancy clothes? The story just didn't seem fair.

Years later, while studying this frustrating text, I discovered something about that culture which radically adjusted my view of the king and his reasonable expectations. You see, it was not only customary for a king to provide the banquet hall, the food, the wine, and all the other party needs, he would also supply the wedding garments. That's right, the king even provided the appropriate dress.

All of a sudden, I understood why the king was so upset at the man who had been invited off the street. The man was unworthy in every sense of the word. He had been given an opportunity that was completely outside his realm of expectations. There he was, a commoner, invited into the king's banquet room. The food and festivities were a dream come true. He had even been given a wedding garment! The entire package was free! However, much like the entitlement culture of today, this man's stubborn will caused him to refuse the only thing the king had asked of him - "Please put on the wedding garment that I freely gave you."

Galatians 3:27 (NIV) "…for all of you who were baptized into Christ have clothed yourselves with Christ."

You and I are the commoners off the street. You and I have been invited into the banquet hall of the King. You and I have the opportunity of a lifetime. There is no payment required! There is no entrance fee demanded. All that the King asks is that we clothe ourselves appropriately; that we put on Christ in baptism.

Why make excuses?! It's free! The clothes are FREE!

We live in a culture of loophole professionals. They have created entire church doctrines around assumed exceptions that lead to damnable excuses.

WRONG QUESTION: "What about the thief on the cross? He wasn't baptized, why should I?”

RIGHT QUESTION: "What about the clear commands of God? Why should I seek an exception when I know the will of the Father and I have time RIGHT NOW to obey Him?"

Staking one’s eternal destiny on possible exceptions is both irresponsible and degrading to the will of the Father.

Matthew 7:21-23 (NKJV) “Not everyone who says to Me, ‘Lord, Lord,’ shall enter the kingdom of heaven, but he who does the will of My Father in heaven. 22 Many will say to Me in that day, ‘Lord, Lord, have we not prophesied in Your name, cast out demons in Your name, and done many wonders in Your name?’ 23 And then I will declare to them, ‘I never knew you; depart from Me, you who practice lawlessness!’”

Examples: Being baptized for the remission of sins is an undeniable pattern throughout the New Testament.

Exceptions: God is the only One Who has the right to make exceptions to His rules. It is NOT our place to preach or teach possible exceptions and, thereby, distract followers from the clear commands of God.

Excuses: Being invited to the free wedding banquet, but stubbornly refusing to put on Christ in baptism (Galatians 3:27) is both selfish and damnable. Don't make excuses about something you understand to do and have the opportunity to do RIGHT NOW.

For those who are actively seeking a way to dilute the importance of baptism, this study has presented many challenges. Unfortunately, many of them will persist in their rebellion and go in search of other examples that can be used. Cornelius is one of their favorites. Next time, we will examine the questions, "What about Cornelius? He received the Holy Spirit before being baptized, so wasn't he saved before being baptized?" Please join us for this important discussion!

Missed the first three lessons in this series? Go to:
The Thief on the Cross: "Intro"
"Examples"
"Exceptions"