Thief on the Cross - Cornelius, Part 2 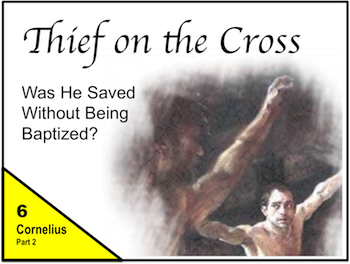 Was Cornelius saved before baptism?

Acts 10 seems to be a ready-made passage for those who desperately want to find at least one biblical example that reduces baptism to a post-salvation symbolic act ("an outward sign of an inward grace"). But is it possible that, in their desperation to validate a human bias, they are distracted from the greater responsibility to submit to the whole counsel of God?

Last time we looked at the first question in the list. Now let's look at the second.

2. Does Divine intervention always indicate salvation or can it simply indicate that God has employed someone or something through Divine validation?

In Ephesus, Paul finds several men who were disciples, but lacked a proper baptism. It seems that, in their pursuit of Christianity, they had only been immersed into John's baptism, a baptism of repentance. Paul explains that John the Baptist's baptism lost its purpose once Jesus had come and now they needed to be baptized in the name of Christ.

It is interesting to note that in verse 5 they obeyed Paul's instructions by being baptized in the name of The Lord Jesus. Yet it was later, in verse 6, that they received the Holy Spirit gifts of tongues and prophecy.

Q: Why were the two events separated?

A: Because a person submits to baptism in order to be saved, but the Holy Spirit assigns gifts to a person in order to validate them or their message. One shows Divine healing, the other Divine employment.

Is There a Difference Between Salvation and Validation?

Is there is a difference between salvation and validation? Absolutely! Notice three examples.

Next time, we will examine the question, "Why would God introduce such an obvious anomaly into the consistent biblical pattern of assigning miraculous gifts after baptism?" Please join us then!

Missed the first five lessons in this series? Go to:
The Thief on the Cross: "Intro"
"Examples"
"Exceptions"
"Excuses"
"Cornelius, Part 1"

Want to continue this series? Go to:
The Thief on the Cross: "Cornelius, Part 3"
"Conclusion"