Thief on the Cross - Cornelius, Part 1 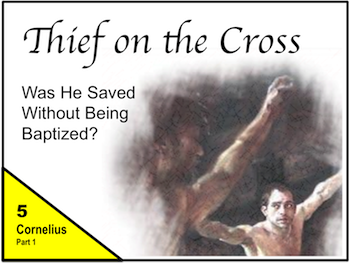 For those who are actively seeking loopholes in God's plan, the excuses they will use to dilute the importance of baptism are endless. After the thief on the cross, Cornelius is almost always their next favorite smokescreen.

So what about Cornelius? Was he saved before baptism?

Some time ago, a friend challenged me to explain why the Holy Spirit gave Cornelius the gift of speaking in tongues before he was baptized. (Acts 10) He was attempting to prove that Divine intervention indicates Cornelius was saved before baptism and, therefore, baptism is not essential to salvation. The following is a summary of my response.

Acts 10 seems to be a ready-made passage for those who desperately want to find at least one biblical example that reduces baptism to a post-salvation symbolic act ("an outward sign of an inward grace"). But is it possible that, in their desperation to validate a human bias, they are distracted from the greater responsibility to submit to the whole counsel of God?

Let's look at each of these questions individually, and then combine the results in conclusion.

It should be noted that Peter insisted on Cornelius and the others being baptized even after the miraculous sign was witnessed by all. Why? If their baptisms were only intended to be a formality that showed they were already saved ("an outward sign of an inward grace'), wouldn't baptism seem a little anti-climactic? Perhaps an even bigger question is this - What would a purely symbolic baptism say about Jesus and His role in that baptism?

Colossians 2:11-12 (NIV) "In him you were also circumcised with a circumcision not performed by human hands. Your whole self ruled by the flesh was put off when you were circumcised by Christ, having been buried with him in baptism, in which you were also raised with him through your faith in the working of God, who raised him from the dead."

If Cornelius was only being baptized as a post-salvation symbol, these very obvious questions arise - What good did a symbolic baptism accomplish given the fact that the Holy Spirit had already given such a dramatic validation with the gift of tongues? How could a symbolic baptism possibly top the reality of what the Holy Spirit had already done? Why would they even try to top the outward sign of the Spirit's miraculous intervention?

I suggest that the only thing that can top an external miracle done for validation is an internal miracle done for salvation. Cornelius and his friends were baptized for the very same reason that all the folks were baptized on the opening day of the church, "for the remission of sins." (Acts 2:38, NKJV). Their healing (salvation) did not precede their surgery (baptism).

Next time, we will examine the question, "Does Divine intervention always indicate salvation or can it simply indicate that God has employed someone or something through Divine validation?" Please join us then!

Missed the first four lessons in this series? Go to:
The Thief on the Cross: "Intro"
"Examples"
"Exceptions"
"Excuses"