Thief on the Cross - Introduction 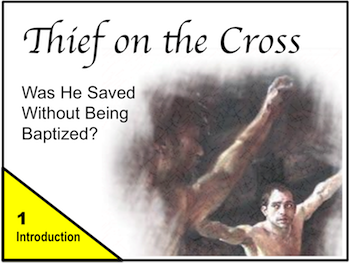 For many years, the Christian doctrine of baptism has been haunted by the question, "What about the thief on the cross?" It is the purpose of this series to answer that question.

The book of Acts was given its name for a very important reason - it is the inspired historical record of the origin and actions of the Lord's church. The example and the precedence set by the early church is nothing less than essential to our understanding of the Lord's instructions. After all, who better to follow than the very ones who spoke directly to the Lord and were specifically commissioned by Him to make disciples and go about "teaching them to obey everything I have commanded you"? (Matthew 28:20, NIV)

Over time, the apostles and other early disciples passed from this life. In their absence, Christians were forced to rely upon the inspired written instructions they had left behind.

This Divine documentation was sufficient for some time, but, as is always the case, human opinion began inserting itself into the doctrinal equation. It wasn't long until an elitist group of religious leaders insisted that they were the only ones who could truly understand those written instructions. Since most Christians did not have direct access to the text they were routinely forced into the informational bondage.

Much time passed. The hierarchy of Catholicism developed and ruled the common man with a very cruel iron fist. Self-study and personal pursuits of God were met with harsh penalties that included dismemberment, torture, and even being burned at the stake.

Then came the printing press.

As access to the Divine documentation became more readily available, a few individuals began challenging Catholicism's interpretations of Scripture. Unfortunately, by this time in history, Christians had grown accustomed and reliant upon the manipulative human influences used to understand God's will. Many were uneducated and had lived for centuries with only the explanations provided by the Roman Catholic Church. Even though self-study was an intriguing possibility, for most, the process was just too intimidating. As a result, the opportunity for direct access to the inspired Word was truncated into a pursuit of reforms rather than restoration. A partial fix, known as the Reformation Movement, was born.

But I ask you, is it enough to limit ourselves to a reformation of Christian doctrine when a full restoration is possible? Is God satisfied when His people lazily depend upon human opinion + Scripture even though Scripture is readily available and is all that is needed?

The greatest difference between the Reformation Movement and the Restoration Movement is the emphasis on biblical authority. By definition, a reformation does not seek the original, but rather an adjustment of the original (Scripture + Human Opinion). On the other hand, a restoration seeks the very beginning stage of origin (Scripture is defined by Scripture).

Consider a stark contrast in the way we approach Christian doctrine today. Catholics inevitably site human tradition and the Pope. Reformists rush to books and quotations from Reformation leaders like Luther, Calvin, Zwingli, etc. But what do true Restorationists do? They fill their comments with Scripture. Why? Because, by definition, the restoration process seeks the original, not a tweaked version of the original.

Catholicism and Reformed Theology differ greatly from Restoration principles in one profound area - hermeneutics (principles governing interpretation of Scripture). They decided long ago that human authority was necessary in order to understand God's Word. Restorationists, on the other hand, resist human input. They trust that the Word of God is enough to explain the Word of God.

One of the greatest weaknesses of Catholicism and Reformed Theology is their unwillingness to see the Bible as one harmonious package. While many of their doctrines seem to be supported by a few passages, when they are compared to the whole counsel of God, it is found that their doctrine forces Scripture into many inconsistent conclusions. It must be remembered that Satan used this very same tactic when he tempted Christ. He isolated passages in order to make them say what he wanted them to say. (Matthew 4:1-5)

The "thief on the cross" argument is a prime example of this satanic seduction.

The answer to this important question, "But what about the thief on the cross?" will anchor itself to three biblical principles: Examples, Exceptions, and Excuses. Next time, we will look at examples. Please join us then!