Thief on the Cross - Cornelius, Part 3 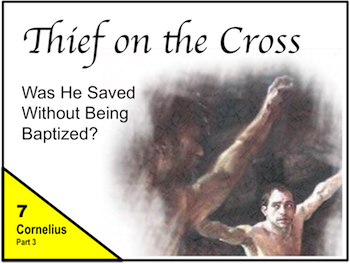 Was Cornelius saved before baptism?

So far we have looked at this subject by examining two very important questions:

Now let's look at the third.

3. Why would God introduce such an obvious anomaly into the consistent biblical pattern of assigning miraculous gifts after baptism?2. Does Divine intervention always indicate salvation or can it simply indicate that God has employed someone or something through Divine validation?

Why did God employ such an attention grabbing measure in this unique situation - because it was just that - unique. Not since Abraham, had the Gentile world been invited into the favor of God. For thousands of years, Gentiles had been looked down upon and rejected. This moment was not just about Cornelius' salvation; it was also about a very important pivotal point in history. God employed dramatic measures because He wanted everyone to know that it was He, not Peter or any other man, Who was validating this historical transition from "Jews Only!" to "Everyone Invited!" In order for that moment to be believed, the invitation required a direct intervention from God.

Note: Even if a person were to argue that Cornelius was saved before baptism, and I do not, it would still need to be viewed as the exception to the rule, not the rule itself. Immaturity is often marked by a preoccupation with exceptions to the rule or a search for ways to get around the rule. Spiritual maturity, on the other hand, leads the faithful into full surrender to the whole counsel of God.

There is a great difference between being employed by God and being saved by Him.

In Luke 19:39-40, Jesus said that God could employ rocks to cry out if His Son was not given praise. Few people would conclude that it meant the rocks were saved.

In Acts 19:11-12, God employed handkerchiefs as a way to pass along the healing powers of Paul. Few people would conclude that it meant the handkerchiefs were saved.

In Numbers 22:28, God employed a donkey to speak a warning to His stubborn prophet Balaam. Few people would conclude that it meant the donkey was saved.

In Genesis 41:25, God employed a pagan Pharaoh of Egypt to receive messages from God that would save His people from a famine. Few people would conclude that it meant the pagan Pharaoh was saved. (Note: It seems that Pilate's wife was also troubled by God in a dream, which led her to declare that Jesus was an "innocent man," Matthew 27:19, NIV. Must we, therefore, conclude that Pilate's wife was saved?)

On the other hand...

In Acts 8:9-17, we find that it is equally possible to be saved, yet not be employed by God to do miracles.

Conclusion: From rocks and handkerchiefs to a donkey and a pagan Pharaoh, it seems clear that employment by God and salvation by God are not the same thing. The anomaly of Acts 10 should not be used to suggest that salvation comes before baptism. Those who do so expose their own desperation to validate a human bias rather than submitting to the abundance of examples and directives that confirm the saving power of Christ's surgery found within baptism.

Next time, we will conclude this series with a very personal heartfelt confession entitled, "Satan has a very big 'But...'" Please join us then!

Want to continue this series? Go to:
The Thief on the Cross: "Conclusion"