What Does Their Holy Book Teach? (Part Two) 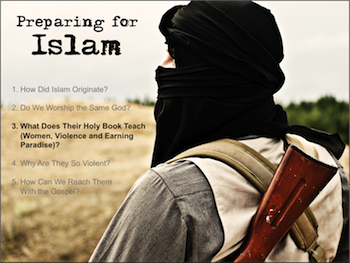 One might say that Muslims come by their violent nature honestly. Remember, Muhammad claimed to be a descendant of Abraham through Ishmael. Yet the prophetic words of God in Genesis 16 predicted that Ishmael would become a wild donkey of a man and his descendants would do the same (Genesis 16:12; 25:18). True to form, Muhammad himself led raids on caravans in order to support his cause and even claimed Divine revelations supporting such violent thievery (Qur'an 22:39-40).

Please consider just one of the instructions given by Muhammad as supposedly inspired by Allah.
Qur'an 5:33 "Those that make war against God and His apostle and spread disorder in the land shall be slain or crucified or have their hands and feet cut off on alternate sides, or be banished from the land."

Note: A more detailed discussion of Islamic violence will follow in the next article. For now, it is simply my intent to show the connection between the teaching of violence within their holy book - the Qur'an, the cruel treatment of women (See point 1 of "What Does Their Holy Book Teach?"), and the root cause of both - legalistic works of merit in an attempt to earn paradise and appease the manipulative god known as Allah.

The Qur'an plainly teaches that, if one works hard enough, he can earn Allah's favor and be rewarded with a place in the lust-fulfilling carnal paradise of Islam.

Notice these passages from the Islamic holy book.

Qur'an 9:120-121 "God will not deny the righteous their reward. Each sum they give, be it small or large, and each valley they traverse, shall be noted down, so that God may requite them for their noblest deeds."

Qur'an 11:114 "Attend to your prayers morning and evening, and in the night-time too. Good deeds shall make amends for sins. This is an admonition for thoughtful men. Therefore have patience; God will not deny the righteous their reward."

Qur'an 16:96 "We shall recompense the steadfast according to their noblest deeds."

At this point I would like to remind you of the incentive given to Muslim men for completing these "noblest deeds".

Qur'an 78:31 "As for the righteous, they shall surely triumph. Theirs shall be gardens and vineyards, and high-bosomed maidens for companions: a truly overflowing cup."

Qur'an 52:20 "They shall recline on couches ranged in rows. To dark-eyed houris We shall wed them."

Please take a moment and consider how this doctrine of carnal rewards might intensify the misuse of women as well as enflame a passion for "righteous" violence in this life? It seems that the Islamic religion is largely based upon the barter system. The faithful pay Allah with prayers and noble deeds then Allah repays the faithful with gardens filled with dark-eyed, high bosomed, virgin goddesses in the afterlife. Again I ask you, if paradise is filled with the carnal pleasures of sensuality, what keeps Muslim men from expecting, no demanding, some of the same in this life?

For a Muslim, it seems that earning Allah's favor is the labor of man's life. For a Christian, however, salvation does not depend upon self-obtained goodness but upon honest submission to a loving Savior. Unlike the Qur'an, which describes a bargain you strike with Allah, the Bible describes a free gift that was purchased by Jehovah's Son.

In Colossians 2:9-12, there is a marvelous passage about the Deity of Jesus and the fullness that comes to those who accept Him as Lord. "For in Christ all the fullness of the Deity lives in bodily form, and you have been given fullness in Christ, who is the head over every power and authority, in him you were also circumcised, in the putting off of the sinful nature, not with a circumcision done by the hands of men but with the circumcision done by Christ, having been buried with him in baptism and raised with him through your faith in the power of God, who raised him from the dead."

Did you get that? Not only does the fullness of God dwell within Jesus, those who have experienced spiritual circumcision through baptism are given "fullness in Christ."

What could possibly happen during baptism that could provide such a "fullness"? Notice the words of Peter in Acts 2:38, "Repent and be baptized, every one of you, in the name of Jesus Christ for the forgiveness of your sins. And you will receive the gift of the Holy Spirit."

At baptism, Jesus circumcises the heart and fills us with the Spirit who is from God.

For the Christian, life is not about earning salvation it is about accepting it. "For it is by grace you have been saved, through faith and this not from yourselves, it is the gift of God- not by works, so that no one can boast." (Ephesians 2:8-9)

Unlike Allah, your God knew that you needed a Savior, so He sent His only begotten Son to pay for it. Love the Son and the Father will honor you. Reject the Son and you will most certainly feel the Father's wrath. Let the Son save you through the surgery of circumcision performed in baptism.

The carnal nature of Islamic teaching is undeniable. Men are taught they are superior to women and even given permission to beat their wives. Their most esteemed prophet, Muhammad, encouraged violence against the infidel and even claimed Divine revelation that validated thievery and dismemberment. The core doctrine that paradise must be earned through legalistic acts of carnal merit feeds the movement to this day. It inspires the mistreatment of women, violence toward the world, and leads to a miserable discontentment with self. Unlike Christians, who have a Messiah to free them from the bondage of legalism, Muslims are trapped in a carnal existence with nothing but carnal initiatives to lure them toward a carnal afterlife. Muslims are miserable and, because of carnality, they take out their misery on the world around them.

1. Protect the women in your life from the influences of Islam's male dominated principles.
Too many women have met Muslim men online, fallen in love from a distance, and learned too late that life in the Islamic world is greatly different from that in a world dominated by Christian values.

2. Teach your sons to honor women according to the standard given in Ephesians 5.
Ephesians 5:25-31 (NIV)"Husbands, love your wives, just as Christ loved the church and gave himself up for her to make her holy, cleansing her by the washing with water through the word, and to present her to himself as a radiant church, without stain or wrinkle or any other blemish, but holy and blameless. In this same way, husbands ought to love their wives as their own bodies. He who loves his wife loves himself. After all, no one ever hated his own body, but he feeds and cares for it, just as Christ does the church- for we are members of his body. 'For this reason a man will leave his father and mother and be united to his wife, and the two will become one flesh.'"

3. Teach your daughters to celebrate their role as women.
From the very beginning (Genesis 2:18), God intended for men and women to be complementary, not interchangeable. His interworking design was intended to illuminate our journey toward knowing Him. It was intended to be a living illustration of the relationship He desires to have with us. Submission to our role is essential to a relationship with Him.

Gender-specific roles illuminate the Gospel. They define the path toward knowing God. The feminist movement is robbing Christian women of one of the greatest compliments ever given by the Creator. Read Titus 2:3-5.

4. Teach your family to appreciate the freedom Christ gives Christians from legalistic bondage.

Missed the first four lessons of this series? Take a look!

To continue with this series, go to:

Back to Top of "What Does Their Holy Book Teach? (Part Two)"