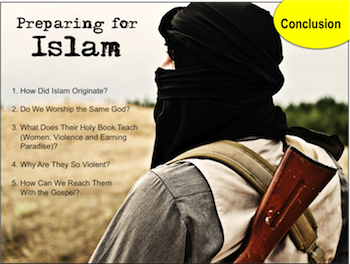 During this important series we have examined the origins of Islam. We have concluded that Allah and Jehovah cannot possibly be the same being. We have seen how the Qur'an encourages violence toward Islamic enemies, unbelievers and even women. Most important of all, we have learned that a proper understanding of biblical authority, a living testimony and reverence for the Messiah are essential to reaching the Muslim world with the Gospel.

Before ending this study of Islam, I would like to share a short story prompted by this material and the failing conditions of our world.

Another restless night of prayer and concern for the world had pulled me out of bed to spend some quiet time with the Father. During the wee hours of that morning the following story came flooding into my mind. It was as if it had been placed there to give my heart an avenue of expression for the haunting empathy I experience nightly. It is my prayer that this story will also prompt conviction within your heart as well as a deep resolve to keep the faith.

The young teenager and her family were part of a tour group visiting many of the elaborate cathedrals of Europe. As they entered into each building, the girl was overwhelmed by the massive marble columns, the brilliant colors in the stained glass windows, and the artistic detail of the finely sculptured ornaments.

At one stop, the tour guide moved the group down a long hall and into the center of a huge auditorium. Immediately their gaze was drawn upward toward the ancient painting on the domed ceiling. The picture of Christ on the cross was breathtaking. So much so that the young girl felt tears forming in her eyes.

Quickly she glanced toward her purse to find a tissue. But as she rummaged through the bag, her ears were drawn to a sound that seemed so out of place in the serenity of the cathedral. It was the clamor of many men rushing down the hall. Seconds later, she looked up and was startled to see that the entire tour group had been surrounded by more that a dozen men. Each of them had an automatic weapon and a scarf covering the lower half of their face.

As the young girl inched closer to her father, she heard one man shout directions in an angry voice. His commands echoed around the room and, even though she was unfamiliar with the language he spoke, she and the rest of the group knew exactly what he was commanding. Each of them moved closer together as the gun barrels were waved in their direction.

The next several minutes were spent in complete terror. The group was bullied, taunted, and humiliated. Brutish men rushed around the building smashing windows, turning over pews, and defaming anything they could reach.

Finally, after what seemed like hours, there was a partial lull in the mayhem. One of the terrorists slowly made his way to the front of the room. With obvious disdain for all that the cathedral represented, he irreverently climbed behind the large wooden podium. Looking down upon the captors he shouted angry directions and each member of the tour group was forced to their knees.

The man surveyed the group as if he were going to launch into a sermon. He then turned and walked toward the large stained glass window behind the rostrum. Its beautiful colors served as the backdrop for the stage and the old wooden cross hanging in the center provided the focal point for the entire room.

The man tossed a rope around the cross. He commanded other men to join him on the stage and he told them to pull. The young girl's heart broke as she watched the center panes from the window shatter and the old wooden cross come crashing to the floor.

Before she could gather her thoughts and wipe the tears from her eyes, she heard more shouting. She looked to one side and saw men walking in her direction. Attempts to bury herself under the arm of her father were useless. One man grabbed her roughly by the arm and the other by the hair. With barbaric cruelty, they forced her toward the stage.

Once there, she was forced to face the other captured tourists. The terrorist leader reached down and yanked a silver cross from her neck. For a very long time he looked at it. He turned it over and over in his hand. Then suddenly, as if his rage could no longer be contained, he threw the cross to the floor. He stomped on it, he shouted expletives into the air, then spit upon the cross.

Turning his attention to the girl, he spoke harshly in words that this time she could understand. "What is this?" he demanded to know. "What is this thing you are wearing around your neck?" Sheepishly the girl raised her eyes to meet those of the tormentor. "It's my cross," she replied in a voice trembling with fear.

She could not answer.

He spit a third time. "Many are going to die this day," he shouted gruffly, "but you do not have to be one of them." His face split into a smile born of the devil. "If you will spit on your cross, I will let you live!"

In that very moment her vision cleared. It was as if the veil of tears had been miraculously lifted from her eyes. At first she could not believe what she was seeing. She looked again and then she knew exactly what she had to do.

While shrugging her shoulders and pushing her hands outward in a plea for help, the light from the broken window behind had cast her shadow across the entire tour group. It was the shadow of the cross.

She knew what she had to do. Slowly she rose to her feet. With shoulders no longer shrugged, she pushed her hands further from her side and, with conviction in her voice, she began to sing.

"All to Jesus I surrender,
All to Him I freely give.
I will ever love and trust Him,
In His presence daily live."

One by one, each member of the tour group rose to their feet. Impacted by her courage and convicted by their own cross, each of them pushed their arms out from their sides and joined her in the chorus.

Jesus stood that day as each of them were carried into His presence. With arms outstretched, He welcomed them home. They had carried their cross and His eternal embrace would be their reward.

"If anyone would come after me, he must deny himself and take up his cross and follow me. For whoever wants to save his life will lose it, but whoever loses his life for me will find it. What good will it be for a man if he gains the whole world, yet forfeits his soul? Or what can a man give in exchange for his soul?" (Matthew 16:24-26, NIV)

Do you have a cross? Will you carry it all the way home?

Heaven, don't miss it for the world!

Missed the first nine lessons of this series? Take a look!

Back to Top of "Preparing for Islam: Conclusion"