Do We Worship the Same God? 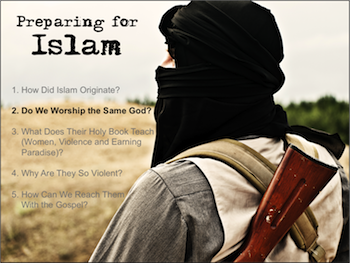 Are Allah and Jehovah the same God? Finding the correct answer to this question is essential. Notice the warning of Deuteronomy 6:14-15, “Do not follow other gods, the gods of the peoples around you; for the Lord your God, who is among you, is a jealous God and his anger will burn against you, and he will destroy you from the face of the land.” (NIV)

To answer this question, we need not look any further than one very important distinguishing difference between the two. Allah does not have a son. According to the repeated words of Islam’s most esteemed prophet, Muhammad, Allah would never stoop so low as to fully identify with those he created.

Consider the words of the Qur’an 19:34-35: “Such was Jesus son of Mary. That is the whole truth, which they still doubt. God forbid that he Himself should beget a son!”

Notice another translation of the last part of this text: “It does not behoove God to have a son. Too immaculate is He!” (19:35, Translator: Ahmed Ali)

In contrast to the Islamic god, Allah, the God of the Bible loves His creation so much “that he gave his only begotten Son, that whosoever believeth in him should not perish, but have everlasting life.” (John 3:16, KJV)

Jesus is the most important difference between Allah and Jehovah. To the Muslim, He was a great prophet. To the Christian, He is nothing less than God in the flesh. He is the greatest expression of the Creator’s love.

In Support of Allah as God

Let's consider three arguments often used in an attempt to convince Christians they should acknowledge that Allah and Jehovah are the same god.

1. One of Muhammad’s greatest claims to fame was his direct connection to Abraham through the lineage of Ishmael.

Q: If Muhammad was related to Abraham through Ishmael, is it not reasonable to conclude that he also acknowledged the same God as Abraham?

A: It was, no doubt, Hagar not Abraham, who gave Ishmael his principle upbringing. Hagar and Ishmael were driven from Abraham's camp when Ishmael was just a boy. This, coupled with the fact that his mother was from Egypt, makes it far more likely that Hagar's pagan roots gave Ishmael a less than pure appreciation of Deity.

2. Islamic leaders since the beginning of the movement have claimed to worship the same God as the Jews and the Christians.

Q: Since God looks upon the heart; won't He look past the name Allah and accept Islamic worship regardless of what they call Him?

A: Would you accept praise regardless of what I called you? My wife's name is Cindy. If I came home from a long road trip, kissed Cindy on the cheek and said, "Susan, I missed you so much!", would she overlook my use of another woman's name?

3. Just because two people have different levels of understanding about God, it does not mean they worship different gods.

Q: Didn’t Paul tell the Athenians that they were ignorantly worshipping God through the altar to the “Unknown God?”

A: Yes, but he did not say that their worship was acceptable. In fact, he said, “In the past God overlooked such ignorance, but now he commands all people everywhere to repent.” Acts 17:30

In Opposition to Allah as God

1. The nature of Allah and Jehovah are different.

- The Bible says we can know God. The Qur’an describes Allah as distant, aloof, and almost beyond human reach.

- The Bible says that God is spirit. Muslims believe that describing Allah as a person or spirit is blasphemous.

- The Bible says that God is one in three persons. The Qur’an scoffs at the idea of God having a Son.

2. Muslims believe that the Qur’an is a God-given supplement to the Torah and the Gospels, yet the word “Allah” is never found anywhere in Scripture. Muslims sometimes claim that when Jesus cried “Eli, Eli,” on the cross that He was saying “Allah, Allah.” However, Jesus’ quotation of Psalm 22:1 was made in Aramaic not Arabic.

3. Allah was originally the name of an Arabian pagan moon god.

- According to historians, long before Muhammad established Islam, the holy cubical known today as the Ka’aba, contained several idols representing various gods. One of the idols was called Allah and three others represented his daughters, al-Uzza, al-Lat, and al-Manat.

- The ritual of kissing the Black Stone was also borrowed from pre-Islamic pagan rituals. In other words, Muhammad transformed the ancient cult of the moon god, Allah, into a monotheistic religion that borrowed pagan practices from many religions of that area. Muhammad also hijacked many practices from Judaism and Christianity in his pursuit to create a dominant world religion.

Q: Can the true worship of Jehovah God grow out of the pagan worship of a false god?

In Comparison With THE Prophet

Muhammad was a prophet of war.
Jesus is the Prince of Peace.

Muhammad called Jews “monkeys and apes.”
Jesus said, “Salvation is of the Jews.”

Muhammad rejected Jesus as the Son of God.
Jesus said, “He who rejects Me rejects Him who sent Me.”

1. It is a very serious offense for God’s people to use the names of foreign gods. Teach your family the proper names of God along with their meanings. Below are just a few.

EL ROI: “God of Seeing” (Genesis 16:13) - the name ascribed to God by Hagar, alone and desperate in the wilderness after being driven out by Sarah (Genesis 16:1-14)

2. Remind your family of the obvious differences between the Islamic god and the God of Christianity.

Allah was originally the name of an Arabian pagan moon god.
Jehovah created the moon.

Allah has no son.
Jehovah sent His Son to die for us.

Missed the first two lessons of this series? Take a look!

Want to continue this series? Go to:

Back to Top of "Do We Worship the Same God?"