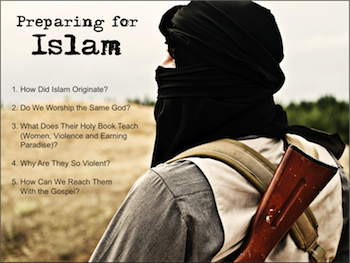 Recently, the following headline appeared on FoxNews.com, "Has a Christian Holocaust begun?"

As the violence of Islam continues to spread throughout the world, alarm bells are ringing here at home. Our people are asking, "What does this mean for American Christians?! What can we do to prepare?!"

This series will highlight some of the material from my eBook, "Preparing for Islam." It will also touch on some of the material I use in the 4-part seminar entitled, "Islam - America's Babylon?" Please join us in this study, buy the book, and consider hosting the seminar at your congregation.

In order to prepare for the growing influences of Islam, five important questions must be addressed:

1. How did Islam originate?

2. Do we worship the same God?

3. What does their holy book teach?

4. Why are they so violent?

5. How can we reach them with the Gospel?

My first memorable encounters with the Muslim culture occurred while visiting Amman, Jordan and various sites within Israel in 1983. Little did I know then just how fundamental those face-to-face encounters would be to my future ministry.

On September 11, 2001, my family and I were midway through a two-month string of Gospel meetings in California. We were a long, long way from our home in Arkansas and felt totally exposed when the news broke. It was still early in the morning on the West coast when a friend, who works for the state, called to tell me to turn on the television and then advised me to find the first gas station available and fill up our vehicle. There was talk that gas prices could soar to $5 a gallon before the day's end.

Alarmed, I hung up the phone then turned on the television. Smoke was already billowing out of the first trade tower. I convinced myself that it was just a horrible accident. Then the second plane hit. America was under attack.

Together, my family and I sat on the edge of a bed in a motel room near Monterey, California, and we wept as each of the trade towers collapsed in front of us. "People are in those buildings!" I sobbed. "People are dying right before our eyes!"

My nine-year-old son had many questions that day, but I had very few answers.

"Why?" he wanted to know. "Why would anyone drive an airplane into a building to kill thousands of innocent people? What would cause a group to do such a thing?"

Will Islam Be America's Babylon?

From those first encounters in 1983, through the heartless terrorism of 2001, my first reading of the Qur'an in 2008, and into the present, I am driven to give Christians a wake-up call.

"In the ninth year of Zedekiah king of Judah, in the tenth month, Nebuchadnezzar king of Babylon and all his army came against Jerusalem, and besieged it. In the eleventh year of Zedekiah, in the fourth month, on the ninth day of the month, the city was penetrated. Then the king of Babylon killed the sons of Zedekiah before his eyes in Riblah; the king of Babylon also killed all the nobles of Judah. Moreover he put out Zedekiah's eyes, and bound him with bronze fetters to carry him off to Babylon. And the Chaldeans burned the king's house and the houses of the people with fire, and broke down the walls of Jerusalem."

This sad story about the Babylonian conquest of a nation that God had once favored should cause every American to ask one very sobering question, "Could it happen again?"

It is the purpose of this material to alert Christians to the coming danger. Unless we repent of our spiritual apathy and quickly turn back to the true God of Abraham, Islam will not only conquer our beloved nation, it will also drag off our unprepared children and indoctrinate them in the ways of Allah.

Watching as our children are persecuted or even killed at the hands of this violent religion would be horrible, but watching them lose their faith and ultimately their eternity with God would be unbearable. The message of this material is essential! Please read it, share it, and pray with your family about its warning. It is time for all Christians to begin Preparing for Islam.

Back to Top of "Preparing for Islam"