How Can We Reach Them With the Gospel?
Part One 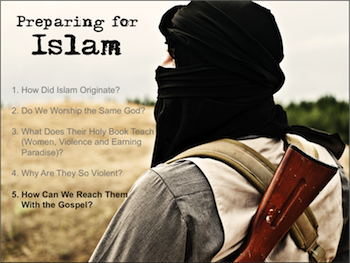 "Jesus answered, 'I am the way and the truth and the life. No one comes to the Father except through me.'"

As the influence of Islam grows around us, Christians must be prepared for more than physical persecution, Christians must also be ready for rich evangelistic opportunities. For over 1,500 years, the Muslim religion has been trapped in the inky blackness of the Dark Ages. The liberating light of the Gospel is perfect for such a time as this!

To help you remember three essential areas for reaching a Muslim, we will use the abbreviation A.T.M. (Authority, Testimony, Messiah)

A is for Authority

In order to reason effectively with a follower of Islam, the establishment of common ground is essential. Read the following passage from their holy book. Buy your own copy of the Qur’an and mark the page for easy reference. This passage is key to establishing authority.

“He has revealed to you the Book with the truth, confirming the scriptures which preceded it; for He has already revealed the Torah and the Gospel for the guidance of men, and the distinction between right and wrong.” (Qur’an 3:1-4)

However, a more likely explanation comes from the Encyclopedia Britannica. According to early publications (before Islamic political correctness), there is no evidence that Muhammad could read; therefore, his dependence on oral communication may explain some of his misconceptions about biblical stories. (Encyclopedia Britannica 13:479) While Jewish, Christian, and pagan traders conversed around the campfires, Muhammad probably listened to their favorite stories with wide-eyed fascination. As tales evolved, names, times, places, and events became confused and were later added to the Qur’anic writings.

The Qur’an says that Pharaoh’s wife adopted Moses (Qur’an 28:9) when the Bible says it was his daughter.

Muhammad calls Jesus’ mother the sister of Aaron, even though this is historically impossible. (Qur’an 19:28) It also claims that Mary gave birth to Jesus under a palm tree instead of in a stable. (Qur’an 19:10)

Not only does the Qur’an contradict many biblical accounts, it even contradicts itself.

Consider also the confusion brought on by the ever-changing Arabic language. Every reader is here challenged to compare two separate translations of the Qur’an. The confusing differences in wording and translations will be obvious. The message of the Qur'an and other teachings of Islam are under constant update to meet the pressures of political correctness. The Qur'an and the Hadith are written in a living language. The message is, therefore, susceptible to the fickle, ever-ongoing changes of political correctness.

"Men are the support of women as God gives some more means than others, and because they spend of their wealth (to provide for them). So women who are virtuous are obedient to God and guard the hidden as God has guarded it. As for women you feel are averse, talk to them suasively; then leave them alone in bed (without molesting them) and go to bed with them (when they are willing). If they open out to you, you do not have an excuse for blaming them. Surely God is sublime and great."

Did you know that some 40 different men who spoke at least 3 different languages wrote the Bible over a period of about 1600 years? Did you know that ancient parts of the Bible refer to events and facts that would not occur or be proven to be true until five or six hundred years later? You must admit that the Bible is an amazing book. Despite the enormous odds against it, the Bible’s harmony and accuracy has never been matched.

Perhaps the best evidence to prove that the Bible is trustworthy comes from the way that God has preserved its message throughout history. Contrary to Muhammad’s claim that the Bible needed an update, God protected its message. Notice just a few examples:

Judaism tried to destroy the Bible. In Jeremiah 36:22-23, we find that Jehoiakim tried to eliminate its message, but he failed. In 100 B.C., Antiochus IV tried to destroy the Bible, but he failed. And shortly after Jesus ascended back into Heaven, the Jewish Sanhedrin forbade preaching in Jesus’ name. Yet today, the book that contains His life-story is read in nearly every corner of the world.

Moslems tried to destroy the Bible. In 732 A.D., they attempted to eliminate all Bibles and kill all Christians, but they failed.

Catholicism tried to destroy the Bible. In 1494-1516 A.D., Ferdinand and Isabella forbade the people to have Bibles. In 1600, Ferdinand II caused ten thousand Bibles to be burned in his attempt to destroy it. In 1637, Jesuits caused sixty thousand Bibles to be burned. In 1713, Pope Clemont II condemned Bible reading. In 1844, Pope Gregory XVI said that Bible societies were guilty of the greatest crime against the church.

The French skeptic, Voltaire, once said, “In less than one hundred years the Bible will be discarded and Christianity will be swept from the earth.” One hundred years later, Voltaire was dead and his house was being used as a depot for the International Bible Society.

Because of the eternal, indestructible, ever harmonious nature of this book, the Bible has never lost its place on the bestselling list! In fact, there is no other book throughout all history that remotely compares with the popularity of the Bible. Parts of the Bible have been translated into more than 1300 languages. About 75 million Bibles are sold each year. Well over one billion copies of this book have been printed. There have been enough Bibles printed to make a solid ribbon of Bibles all the way around the world, not just once or twice, but three times.

Conclusions: If Muhammad is correct, then we must conclude that God failed to protect His Holy Word, history is in error, and the accuracy of the most documented book in all of history is doubtful. On the other hand, if the Torah and the Gospels are correct, then they stand in judgment of the Qur’an’s inaccuracies and the entirety of the Islamic faith crumbles.

If Muhammad is correct, then we must conclude that God failed to protect His Holy Word, history is in error, and the accuracy of the most documented book in all of history is doubtful. On the other hand, if the Torah and the Gospels are correct, then they stand in judgment of the Qur'an's inaccuracies and the entirety of the Islamic faith crumbles.

Missed the first six lessons of this series? Take a look!

To continue this series, go to:

Back to Top of "How Can We Reach Them With the Gospel? (Part One)"