Why Are They So Violent? 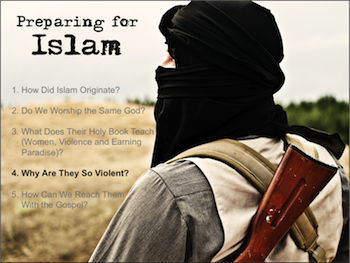 1 John 4:1-6 (NIV)
" Beloved, do not believe every spirit, but test the spirits, whether they are of God; because many false prophets have gone out into the world. By this you know the Spirit of God: Every spirit that confesses that Jesus Christ has come in the flesh is of God, and every spirit that does not confess that Jesus Christ has come in the flesh is not of God. And this is the spirit of the Antichrist, which you have heard was coming, and is now already in the world. You are of God, little children, and have overcome them, because He who is in you is greater than he who is in the world. They are of the world. Therefore they speak as of the world, and the world hears them. We are of God. He who knows God hears us; he who is not of God does not hear us. By this we know the spirit of truth and the spirit of error."

After completing my reading of the Islamic holy book in 2008, I concluded that most Christians, and even Muslims, have little understanding of what the Qur’an actually says about violence. The world needs to understand why this backward religion has had so much trouble emerging from the Dark Ages.

Ever since Islam rudely forced itself onto the world stage September 11, 2001, world leaders have used political correctness to sidestep the reality of this movement’s core values. To pacify the oil-rich nations of Islam, the phrase “radical Muslims” is often used to differentiate between the terroristic acts of “a few” and the majority of Muslims living worldwide.

However, when world leaders do this, they ignore two very fundamental questions:

1. Does the majority really represent what Islam is intended to become?

2. What will happen when the majority decides to return to the teachings of their holy book?

Q: What will we do if the second largest world religion rallies its members to return to faithful obedience of the teachings and practices laid out in the Qur’an? I believe it is only a matter of time. Are you spiritually strong enough to persevere under the persecution already being felt by thousands of Christians worldwide? Have you prepared your family? Are your real treasures in Heaven or are you anchored to firmly to this world? Will you be faithful?

1. What Does Their Holy Book Say?

Below you will find several alarming passages from the Qur’an. We will let their holy book speak for itself. Please take time to read each passage and ask yourself what would happen if these values were to become dominant within our nation.

Qur’an 4:34
“Men have authority over women because God has made one superior to the other…. As for those from whom you fear disobedience, admonish them, forsake them in beds apart, and beat them. Then if they obey you, take no further action against them. Surely God is high, supreme.”

Qur’an 9:5
“When the sacred months are over slay the idolaters, wherever you find them. Arrest them, besiege them, and lie in ambush everywhere for them.”

Qur’an 9:73
“Prophet, make war on the unbelievers and the hypocrites and deal rigorously with them.”

Qur’an 9:121
“Believers, make war on the infidels who dwell around you. Deal firmly with them. Know that God is with the righteous.”

Qur’an 5:33
“Those that make war against God and His apostle and spread disorder in the land shall be slain or crucified or have their hands and feet cut off on alternate sides, or be banished from the land.”

2. Is it Fair to Assume That a Good Muslim Obeys the Qur'an?

If good Muslims obey their holy book, then it is reasonable to conclude that the politically correct propaganda about them is unreasonable. Islam is not a peace-loving world religion that has been hijacked by a few radicals. Islam is a violent world religion that has not yet brought all of its followers into full submission to the violent teachings of the Qur’an. Islam is a time bomb waiting to and America's leaders seem not to have enough common sense to walk away from it.

3. But What About the Jews in the Old Testament?

When passages from the Qur’an, such as the ones above, are brought to light, Muslims are quick to point out that God’s people under the Old Testament acted very similarly. Though their statement may be true, their defense has two very significant problems:

1. During the Old Testament period of history, God was preserving a remnant of humanity in order to bring His Son into the world. To do this, He worked within the violent infantile sandbox rules of that time.

2. Today however, Christians are “now” (Acts 17:30, NIV) called to live above the cruel “survival of the fittest” standards of this human realm. The arrival of the God/man, Jesus, changed the rules on the playing field dramatically. No longer do God’s people bow to the violent bully standards of the world, we look beyond this realm and are commanded to live civil lives as pilgrims who do not belong here. (1 Thessalonians 4:11, NIV)

1 Corinthians 2:12-14 (NIV)
“We have not received the spirit of the world but the Spirit who is from God, that we may understand what God has freely given us. This is what we speak, not in words taught us by human wisdom but in words taught us by the Spirit, expressing spiritual truths in spiritual words. The man without the Spirit does not accept the things that come from the Spirit of God, for they are foolishness to him, and he cannot understand them, because they are spiritually discerned.”

Islam is still living in the sandbox. Unlike those who have grown beyond the use of violence to solve their problems, the Muslim holy book has never lifted its people above the bully rules of cruel coercion. Because a good Muslim refuses to accept Jesus as God’s Son, he cannot appreciate the standards of life on a spiritual plane, “…they are foolishness to him, and he cannot understand them, because they are spiritually discerned.” (1 Corinthians 2:12-14, NIV)

May every Christian everywhere see it as his personal responsibility to draw others out of the sandbox of human immaturity through the acknowledgment of God’s only begotten Son.

2. Have a safe location to which your family can go in times of persecution.

3. Buy a gun. Teach your family to respect it and how to use it. Support gun ownership laws.

Matthew 10:16-17, 22-23 (NIV)
“I am sending you out like sheep among wolves. Therefore be as shrewd as snakes and as innocent as doves. Be on your guard…. You will be hated by everyone because of me, but the one who stands firm to the end will be saved. When you are persecuted in one place, flee to another.”

Romans 12:17-18 (NIV)
“Do not repay anyone evil for evil. Be careful to do what is right in the eyes of everyone. If it is possible, as far as it depends on you, live at peace with everyone.”

Value life, especially the life of the aggressor, but remember you are also called to protect the innocent and defend the weak.

With great intention, the Prince of Peace fashioned a whip and cleared the temple in John 2. In Luke 7, Jesus awarded great praise to a commander in the Roman army, yet He did so without even a hint of admonition that the Centurion should leave his military profession. In Matthew 23, Jesus launched a verbal barrage against the hypocrisy of His day and, in Luke 22, He instructed His followers to buy swords. Jesus is not a pacifist, yet He is the Prince of Peace.

We too must find the balance between “turn the other cheek” and “if you don’t have a sword, sell your cloak and buy one.” (Luke 22:36, NIV)

As the politically incorrect material for this book was being compiled, I found it interesting that the following lead story was posted on FoxNews.com. Is it irony or is this a sobering warning about the reality of real-time challenges facing Christians today?

“The federal government is spending nearly $1 million to create an online database that will track ‘misinformation’ and hate speech on Twitter.

The National Science Foundation is financing the creation of a web service that will monitor ‘suspicious memes’ and what it considers ‘false and misleading ideas,’ with a major focus on political activity online.

The ‘Truthy’ database, created by researchers at Indiana University, is designed to ‘detect political smears, astroturfing, misinformation, and other social pollution.’” (FoxNews.com, August 20, 2014)

I guess it’s that last phrase that troubles me most, “and other social pollution.” How long will it be until Christianity is considered a “social pollution?” How long until material like this and other expressions of opposition to Islamic barbarism are found to be hate crimes? How long until the presentation of truth about Islam’s holy book is no longer protected by free speech?

Missed the first five lessons of this series? Take a look!

To continue this series, go to:

Back to Top of "Why Are They So Violent?"